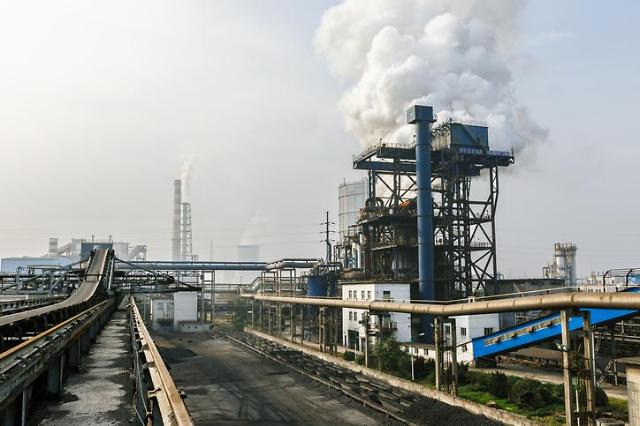 SEOUL -- South Korea's steel industry heaved a sigh of relief after it won conditional approval to go ahead with the artificial use of blast furnace bleeder valves that have been criticized by environmental activists and regional communities for aggravating air pollution caused by fine dust and other hazardous particles.

Posco and Hyundai Steel, the country's two largest steel companies, have been under pressure to reduce the emittance of air pollutants by installing anti-pollution equipment or face administrative disadvantages such as the forced shutdown of furnaces.

Posco has nine blast furnaces in Pohang and Gwangyang, while Hyundai Steel runs three Dangjin. They have opened bleeder valves regularly during the maintenance and safety inspection of blast furnaces to discharge water vapor and gas created by burning coke, a porous fuel with high carbon content used to heat smelting furnaces.

Every furnace has four bleeders at the top of its chimney. It is opened once every two months to maintain constant pressure and prevent explosions or fire. When a bleeder valve is open, blast-furnace gas is released to the atmosphere. The untreated gas contains particulates and, therefore, represents a potential source of air pollution.

On Tuesday, the Ministry of Environment and a public-private consultative body allowed the operation of bleeder valves if the steel industry improves the opening process of valves and submits revised operation plans. Local governments delayed administrative action when the consultative body was launched on June 19.

After two months of an investigation, the consultative body found a way to minimize dust emissions by stopping the injection of coal dust for fuel at an early date and adjusting low wind pressure. In order to manage pollutants, the environment ministry decided to establish regulations on the total amount of pollutants from each company annually.

No official measurement or analysis has been made on pollutants emitted through bleeders. However, local governments have asked Posco and Hyundai Steel to shut down steel mills and install anti-pollution facilities that would greatly reduce the emission of fine dust and other air pollutants such as nitrogen oxides and sulfur oxides.

Steel company officials have insisted that the regular opening of bleeder valves has been an international practice. Blast furnaces should operate without a break to prevent molten metal from hardening, they said, adding that if furnaces are suspended for more than four days, it will take three months to resume operation.

Provincial government officials prioritized the health and environmental rights of residents, urging steel companies to fulfill their social responsibility, take anti-pollution measures more vigorously than before and forget outdated logics. They stressed that bleeders should open automatically in an abnormal situation, not artificially during regular repair work.

Fine dust, which refers to particles smaller than 10 micrometers and causes various respiratory problems, has been a stringent social issue since Seoul and nearby areas were hit by a record level of fine dust for days in early March. President Moon Jae-in has ordered the gradual shutdown of old fossil-fueled power plants in an effort to reduce fine dust emissions.

A World Health Organization (WHO) report, presented at the 2018 UN Climate Change Conference in Bonn, showed that 9 out of 10 people breathe air containing high levels of pollutants and that around seven million people every year die from exposure to fine particles in polluted air. The figure could be far surpassed by deaths caused by rising global temperatures and extreme weather if emissions, primarily caused by the burning of fossil fuels and deforestation, are allowed to rise at their present rate.