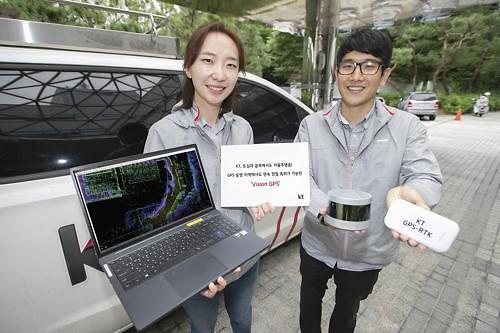 SEOUL -- KT, a top telecom company in South Korea, has developed a high-precision location information system called Vision GPS, based on LiDAR sensors, that could be used for autonomous driving in crowded urban areas.

LiDAR is a remote sensing technology that measures the distance to a target by illuminating the target with laser light and measuring the reflected light with a sensor. KT said Tuesday that it has used LiDAR sensors to maintain the accuracy of location in downtown areas where GPS performance slows down.

Vision GPS requires no separate 3D image databases by recognizing changes in feature points extracted from LiDAR images and calculating their distance and location, KT said, adding that unlike cameras, stable measurements can be made without being affected by weather or lighting.

If the performance of GPS is suddenly reduced, it is difficult to maintain the lane due to the difficulty of stable operation. Vision GPS ensurs safely driving without being affected by the performance degradation of GPS.

Through the combination of Vision GPS and GPS-RTK (real-time kinematic), a real-time location information system for mobile observation, KT plans to complete verification by the end of the year before applying it to autonomous driving in urban areas. Low-cost GPS-RTK receivers will be provided first to rental cars for demonstration on the southern resort island of Jeju