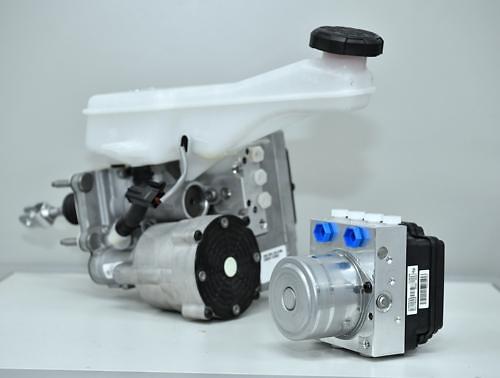 SEOUL -- Hyundai Mobis, a parts-making unit of South Korea's Hyundai auto group, has developed a new concept braking system optimized for a high level of autonomous driving that require no input from drivers if there is no dangerous situation.

Autonomous driving technology is developing at a rapid pace, but safety is the most pressing question. System redundancy or back-up systems would provide the most practical solution to ensuring reliability if functions like braking and steering fail.

Hyundai Mobis said proudly that its "redundancy" brake system can be applied immediately to cars. The system operates on its own even if electronic devices fail or the brakes do not operate normally due to external shocks. It is an essential technology to ensure the safety of full self-driving because level four and five autonomous vehicles are required to solve unexpected situations by themselves.

Hyundai Mobis said the system consists of two electronic braking systems, a software platform and a unit that controls them. Normally, two control systems are connected to each other to exchange information. If the main brake system fails to operate normally, the controller orders an auxiliary device to run.

Hyundai Mobis has accelerated the development of sensors, cameras and parts for autonomous vehicles and infotainment. In March, Hyundai Mobis partnered with Yandex, a Russian company specializing in Internet-related products and services, to develop systems for a high level of autonomous driving that can be used for driverless taxis.

A month later, Hyundai Mobis unveiled an adaptive air suspension technology that will help autonomous vehicles travel smoothly in various road conditions while maintaining stability. The technology adaptively adjusts the height of a car and the softness of its suspension based on navigation map data.