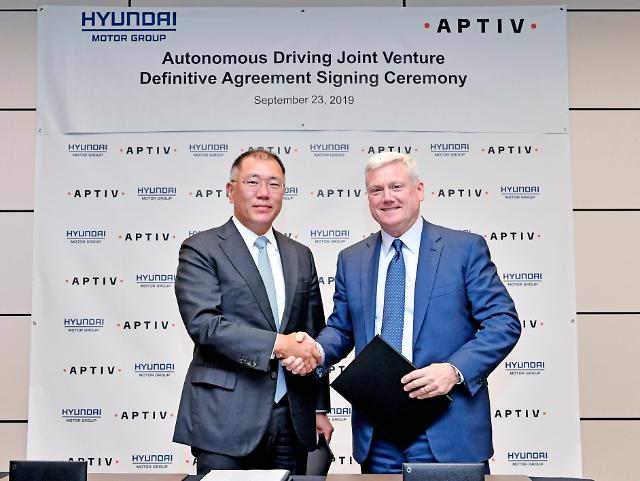 The two companies said in a joint statement that the joint venture will advance the design, development and commercialization of level 4 and 5 autonomous technologies. Level 4 autonomous vehicles require no input from drivers if there is no dangerous situation and level 5 vehicles do not require human attention.

The joint venture will begin testing fully driverless systems in 2020 and have a production-ready autonomous driving platform available for robot taxi providers, fleet operators, and automotive manufacturers in 2022, the statement said.

"The goal is to mass-produce self-driving technology in earnest by 2024," Chung Eui-sun, executive vice chairman of the Hyundai auto group, told a separate press event in New York after he attended a signing ceremony. "If our software solutions are excellent, we can supply them to other carmakers as well," Chung said, giving a conservative prediction that the era of autonomous driving would come around 2030.

While other global carmakers focus on electric vehicles using lithium-ion cells, Hyundai has touted hydrogen fuel as an alternative to solve global problems such as pollution and restore resource depletion because of its eco-friendly characteristics.

It was the latest of a series of Hyundai's strategic investments in promising domestic and foreign start-ups. In June, the auto group made a strategic investment into Aurora Innovation, an American autonomous vehicle technology company, to put robot taxis into test operation by 2021 in smart cities by using NEXO, a hydrogen fuel cell electric vehicle.

Hyundai Mobis, the group's car parts subsidiary, has accelerated the development of sensors, cameras and parts for autonomous vehicles and infotainment. The company has partnered with Yandex, a Russian company specializing in Internet-related products and services, to develop systems for a high level of autonomous driving that can be used for driverless taxis.