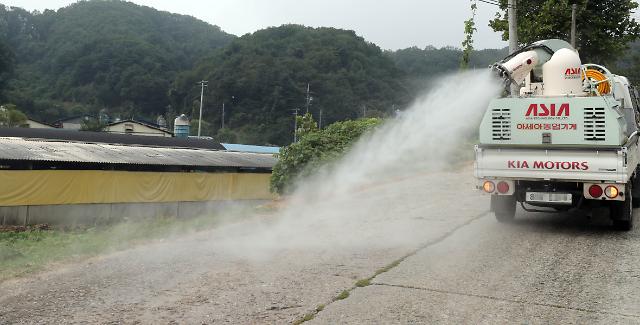 SEOUL -- African swine fever appeared to have spread considerably across North Korea, with pigs in a northern province bordering China probably being wiped out by the deadly and highly contagious animal virus due to poor quarantine, South Korea's spy agency said.

Since North Korea informed the World Organization for Animal Health (OIE) in May that it detected the first case of African swine fever (ASF), there were signs of the virus spreading considerably through the isolated country, the South's National Intelligence Service (NIS) told a closed-door session of the National Assembly intelligence committee.

The spy agency made a guess that all pigs in North Pyongan Province appeared to have been "wiped out," ruling and opposition party legislators told reporters after participating in the session.

China, which is the world’s biggest pork producer, became the first Asian country to be hit by ASF in August 2018. The epidemic has spread to other Asian countries. ASF is not harmful to people, but it is highly fatal and epidemic for pigs, with a mortality rate of up to 100 percent.

Since the first ASF case was detected in May, North Korea has taken various measures such as the culling of infected pigs and a ban on the movement of personnel from affected areas, but the outbreak has been continuously occurring in various regions since July, according to the NIS report.

The NIS report came as South Korea confirmed the fourth ASF case at a pig farm in the border city of Paju on Tuesday, a week after the first case was reported in the same area on September 17.

South Korean quarantine officials have yet to complete an epidemiologic investigation, but the Seoul government decided to control the population of wild boars in border areas. South Korea has tried hard to prevent ASF from entering through wild boars living north of the Demilitarized Zone (DMZ), which splits the Korean peninsula.