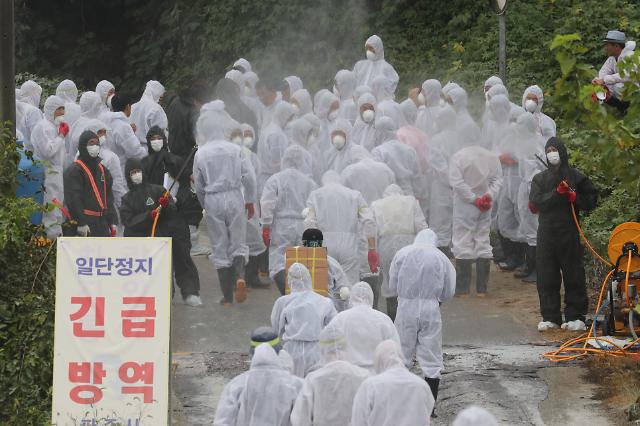 
SEOUL -- Wild boars have been regarded as an indicator of a sound ecological system in a no man's zone that forms the world's last Cold War frontier guarded by South and North Korean troops. Not anymore as frontline soldiers were ordered to shoot them down on sight near iron fences erected along the Demilitarized Zone, which splits the Korean peninsula.

The order came after the highly contagious virus of African swine flu (ASF) was detected from the body of a wild boar found inside the DMZ in Yeoncheon, a border town northeast of Seoul, on October 2. In order to prevent accidental border clashes, South Korea has sent a military hotline message to North Korea about guidelines for killing wild boars.

The DMZ is a four-kilometer-wide strip of land that has divided the peninsula since an armistice accord ended the three-year conflict in 1953. It has been heavily fortified with minefields, concrete walls and iron fences. Scientific surveillance devices such as sensors, cameras and other sensitive equipment are now installed on iron fences to monitor intruders.

The restricted zone provides a unique environment that wildlife can inhabit without the influence of various development projects and other human activity. However, boars became a nuisance after South Korea reported the outbreak of ASF on September 17. In three weeks, 13 cases have been detected with more than 100,000 pigs culled. Quarantine officials have killed all pigs in a 3-kilometer radius of infected farms.

South Korea had tried hard to prevent ASF from entering through wild boars living north of the DMZ, only to see its spread in border areas.

ASF appeared to have spread considerably across North Korea, with pigs in a northern province bordering China probably being wiped out by the deadly virus due to poor quarantine, according to the South's National Intelligence Service.

China, which is the world’s biggest pork producer, became the first Asian country to be hit by ASF in August 2018. The epidemic has spread to other Asian countries. ASF is not harmful to people, but it is highly fatal and epidemic for pigs, with a mortality rate of up to 100 percent.