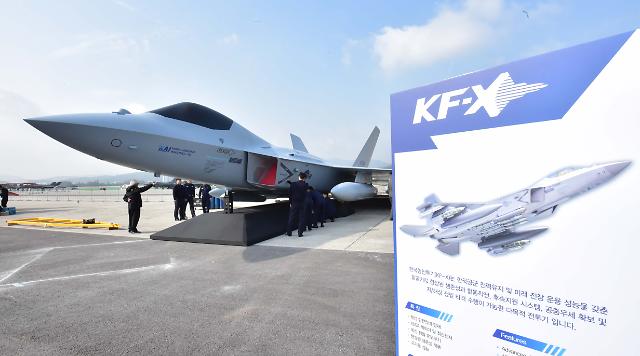 SEOUL -- The actual model of South Korea's home-made KF-X fighter jet was unveiled along with an operational weapons system. The design of hardware and software has been completed, with component fabrication underway. Korea Aerospace Industries (KAI) plans to deliver the first prototype in the first half of 2021.

The KF-X project aimed at manufacturing 120 fighter jets that would replace South Korea's aged fleet of US-made F-4 and F-5 fighters began in January 2016, led by a consortium of KAI and US aerospace giant Lockheed Martin.

KAI showcased its actual model Monday at Seoul ADEX 2019, an aerospace and defense exhibition held at a military airport in Seongnam, south of Seoul. Specifications outlined by KAI showed that the fighter's maximum speed is Mach 1.81 with its range put at 2,900 kilometers (1,798 miles). With a maximum payload of 7,700 kilograms, 10 "pods" for missiles and fuel barrels are installed on the bottom of the fuselage and wings.

The exterior is similar to F-35A, but KAI said it costs about half less to operate and has better mobility.

As Washington has been reluctant to allow Lockheed to transfer technologies related to the active electronically scanned array (ASEA) radar and other core components, South Korea sought to receive technical support from an Israeli firm for the development of the AESA, a more advanced and sophisticated system which can radiate multiple beams of radio waves at multiple frequencies simultaneously.