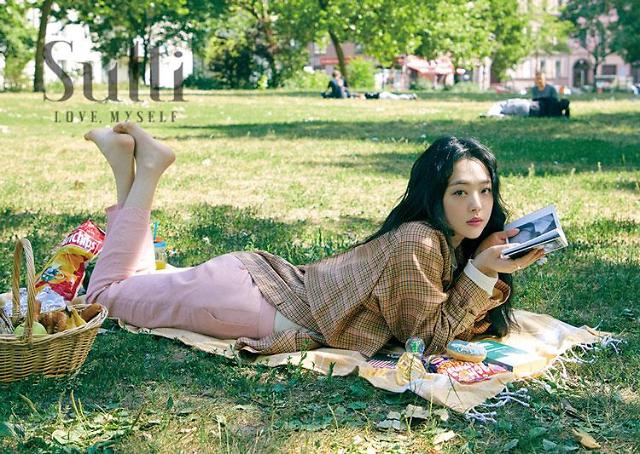 
SEOUL -- As South Korea's entertainment industry was stricken with grief, postponing official events to condole on the sudden death of Sulli, K-pop fans abroad voiced anger and blamed cyberbullies for stimulating suicide impulse psychology for the former f(x) member who had been the frequent target of hate comments.

Choi Jin-ri, known by her stage name Sulli, was found dead Monday at the second story of her house in Seongnam, a southern satellite city of Seoul. No last note was found, but police raised suspicions about suicide, pointing to a self-written note of usual feelings.

SM Entertainment artists were the first to cancel scheduled events or suspend their activities for a period of mourning. Without having the time to celebrate the stellar Billboard Albums chart success with its U.S. debut album, SuperM, an all-star unit boy band created by SM, canceled the shooting of a special music show.

Super Junior canceled an online live comeback show, which was to be held on Monday night. Amber, a former bandmate of Sulli, postponed all scheduled events and wrote on her Instagram, "Due to recent events I'll be putting on hold my upcoming activities. Sorry, everyone. Thank you for your thoughts."

"We are sorry to pass on such a sad and heartbreaking news. Sulli has left us. The current situation is so unbelievable and sorrowful," SM Entertainment said in a statement. Sulli's family would hold a quiet, private funeral, the agency said, calling for no media coverage.

The fan community was rattled by Sulli's death, with fans uploading hundreds of thousands of posts and comments to express condolences. "Another beautiful angel has been called home. Gone so soon but we all know she's in a better place now," said "oi3thelin", an Instagram user. Another user "yin_1405: said: "I miss her, the angel has the most beautiful smile. I will always remember her silhouette in my heart."

Global fans expressed anger to cyberbullies. For many years, Sulli had been dogged by a barrage of hate comments and malicious rumors spread by radical feminists who criticized her for uploading Instagram images which they thought were provocative.

"Your words, it’s your words, harms them mentally, until they hit that limit so they harm their self physically. Isn’t it not enough for you?" Instagram user "moncheriery" left a comment criticizing cyberbullies.

Unlike other celebrities who hesitate to take strong action, Sulli fought back hard, denying all accusations while uploading more provocative posts onto her Instagram. Even at the moment of her death, she had received a fair amount of malicious comments.

In October last year, she revealed her difficult past on a solo reality show. Explaining the process of leaving her band, Sulli confessed that she suffered from sociophobia and panic disorder.

In May, Sulli joined a cable TV talk show titled "Night of Hate Comments" in which guest celebrities had to face their worst nightmare by confronting cyberbullies and reading out online hate comments. In her first broadcast, Sulli said, "I thought we should just cry when we have tears," responding calmly by reading malicious comments toward her.

Thousands of fans called for action against cyberbullies. "I wish the law against cyberbullying should be enforced properly. There are many people who hide behind their online privilege anonymity to do many cruel things," said "YGee", a user from South Korean online community Clien.

Cyberbullying has been a problem in South Korea's entertainment scene for decades. Some entertainers have committed suicide due to depression aggravated by malicious online comments.