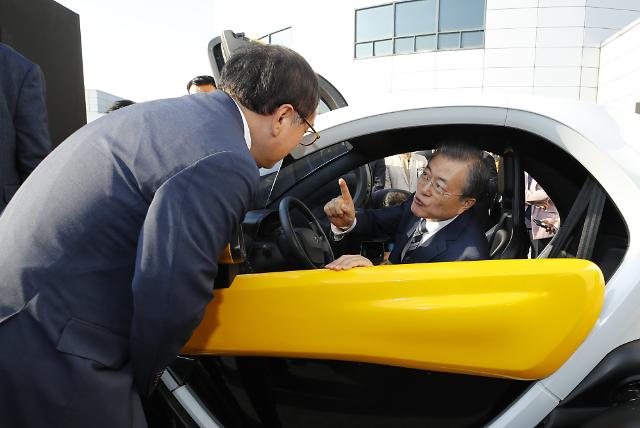 SEOUL -- President Moon Jae-in presented a new national goal to become the world's first in putting autonomous driving into commercial use on actual roads, saying South Korea should lead the era of the Fourth Industrial Revolution with future cars.

The lofty goal was outlined during Moon's visit Tuesday to a research and development center run by South Korea's Hyundai auto group in Hwaseong, south of Seoul. "We will be the first and the best in the world in future cars and lead the era of the Fourth Industrial Revolution with future cars."

"We will be the first in the world to commercialize autonomous driving," Moon said, calling for the construction of infrastructures, including wireless communication networks between cars and roads, three-dimensional precision maps, integrated control systems, and road signs by 2024 and the commercialization of fully autonomous driving on major roads without the involvement of drivers in 2027.

Moon urged South Korea to install 15,000 rapid chargers for electric vehicles by 2025 and 660 hydrogen charging stations by 2030. "Batteries, semiconductors and IT technology, which are the core of future cars, is also the best in the world, and when combined with the world's fastest mobile telecommunication network, we can lead autonomous driving and preempt the future car market."

Chung Eui-sun, executive vice chairman of the Hyundai auto group, has said that hydrogen fuel cell vehicles are suitable for autonomous driving as electricity consumption increases rapidly in self-driving systems. Hyundai has touted hydrogen fuel as an alternative to solve global problems such as pollution and restore resource depletion because of its eco-friendly characteristics.

"In the near future, customers will experience various means of transportation beyond cars on the road such as Urban Air Mobility, Lastmile Mobility and robots," Chung said in Tuesday's ceremony.

Trade, Industry and Energy Minister Sung Yun-mo said Huyndai would invest 40 trillion won ($20.1 billion) in building an ecosystem of next-generation cars by 2025, followed by 20 trillion won from other companies for five years. The government will make a separate investment of 2.2 trillion won to support technology development.

The blueprint released by Sung's office called for the release of level 4 self-driving vehicles in 2024 and the practical development of flying cars in 2025. Level 4 autonomous vehicles require no input from drivers if there is no dangerous situation and level 5 vehicles do not require human attention.

Hyundai appointed Shin Jai-won, a prominent NASA researcher, as the head of its newly-established division for air mobility in September to develop flying cars. Shin oversaw a $725 million program to lead many new aeronautics research initiatives such as supersonic X-plane and urban air mobility.

Urban air mobility is a new idea that utilizes flying transports such as compact-sized airplanes and multi-copters in crowded urban areas to provide quick travels and ease traffic. Mobility services such as car-sharing and connected cars have gained attention around the world for convenience and affordability.