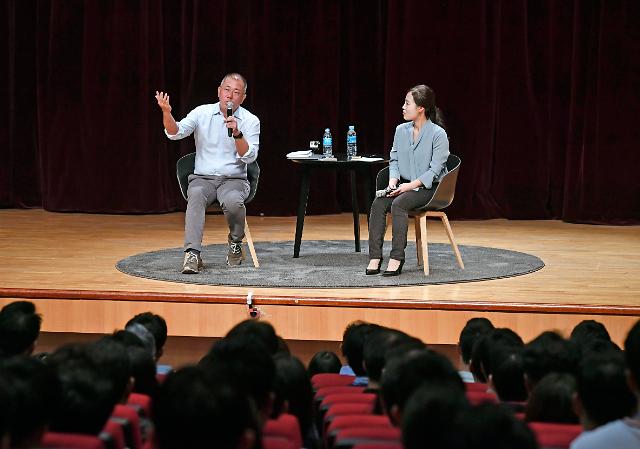 
SEOUL -- Chung Eui-sun, the virtual head of South Korea's Hyundai auto group, called for a drastic structural change to become a key  player in the production of personal air vehicles or flying cars, saying many carmakers would disappear in the future auto industry.

Personal air vehicles (PAVs) are emerging as a future system of travel to avoid traffic jams on urban roads as the doorstep-to-doorstep average speed for cars is predicted to degrade further. An air taxi is a small commercial aircraft which makes short flights on demand. Startups as well as global giants such as Airbus, Boeing and Uber are vying to develop PAVs and autonomous air taxis.

"In the future, I think that cars will be 50 percent, PAVs 30 percent and robotics 20 percent, and we will be transformed into a company that focuses on services," Chung, 49, said Tuesday at a town hall meeting with employees at the group's head office in Seoul. He has launched a campaign to eliminate a conservative group culture, streamline its complicated governance structure and enhance transparency.

"The world's trend is changing, but I think we are a little short of changing, so I thought I'd make a more drastic change," said Chung who has headed the group as executive vice chairman with his 81-year-old father staying away from daily group affairs. The ailing chairman has almost disappeared from public eyes last year and this year, sparking rampant speculation about his health.

"Many companies will disappear in the future auto industry," the vice chairman said, adding the global auto market is now glutted with 25 million vehicles. "It's not just to make cars well, but to provide a leading solution so that customers can pick our cars. That's what we're going to do."

Hyundai appointed Shin Jai-won, a prominent NASA researcher, as the head of its newly-established division for urban air mobility in September to develop flying cars. Shin oversaw a $725 million program to lead many new aeronautics research initiatives such as supersonic X-plane and urban air mobility. Urban air mobility is a new idea that utilizes flying transports such as compact-sized airplanes and multi-copters in crowded urban areas.