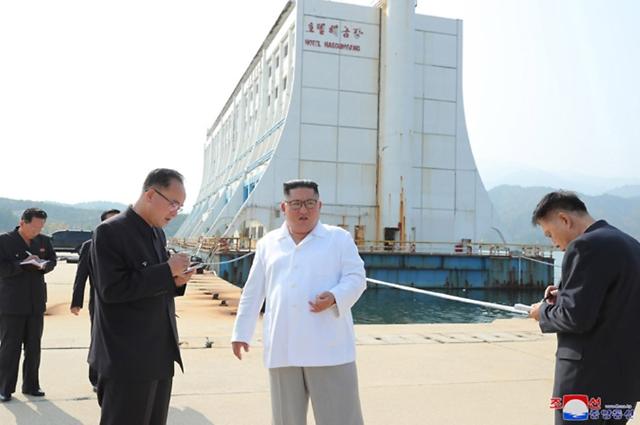 SEOUL -- North Korea sent a proposal for discussion on the demolition of hotels and other facilities built by South Korea in a tourist resort located just north of the inter-Korean border, two days after its leader issued a surprise order to transform ''unpleasant-looking" facilities into a modern world-level tourist destination.

In a message sent to Seoul on Friday, Pyongyang called for inter-Korean discussion by means of document exchanges to remove facilities in the Mount Kumgang resort, according to the South's Unification Ministry in charge of cross-border affairs. Facilities in the resort have been left unattended since a South Korean housewife was fatally shot by a North Korean guard in 2008.

"After consulting with related agencies, the government will take active measures to protect the property rights of our people," the ministry said in a statement, adding North Korea asked South Korea to visit the Mount Kumgang resort at a date agreed in advance and tear down facilities.

The unification ministry said it wants a face-to-face inter-Korean meeting to discuss the North's proposal. "We believe a meeting between the authorities is necessary for now," ministry spokesman Lee Sang-min told reporters. "We will fully examine the different situation and come up with a creative solution to the tour program."

"In the process of preparing countermeasures in the future, we believe that there will be some areas to consider in terms of cooperation between the U.S. and South Korea, if necessary," Lee said, indicating Seoul may seek Washington's concessions and understanding in keeping the inter-Korean tour program alive.

In the process of preparing countermeasures in the future, we believe that there will be some areas to consider in terms of cooperation between the U.S. and South Korea, if necessary.

During his inspection of the resort this week, North Korean leader Kim Jong-un ordered the demolition of South Korean facilities, criticizing a "mistaken" policy adopted by his late father to capitalize on foreign capital. Kim set forth detailed tasks for changing "awkward-looking" facilities into a modern cultural tourist resort.

"The buildings are just a hotchpotch with no national character at all, and that they were built like makeshift tents in a disaster-stricken area or isolation wards," Kim said, adding facilities there "are not only very backward in terms of architecture but look so shabby as they are not taken proper care of."

South Koreans will be allowed to visit the resort after it was rebuilt, Kim said, adding North Korea would manage cross-border tours. In his New Year message, the leader called for the unconditional resumption of suspended inter-Korean projects such as cross-border tours and a joint industrial zone in the border town of Kaesong, which used to be a symbol of inter-Korean cooperation.

The Kaesong zone, which was opened in December 2004, once hosted about 120 South Korean firms manned by more than 50,000 North Korean workers. Seoul shut it down in 2016 in retaliation for the North's ballistic missile and nuclear tests.