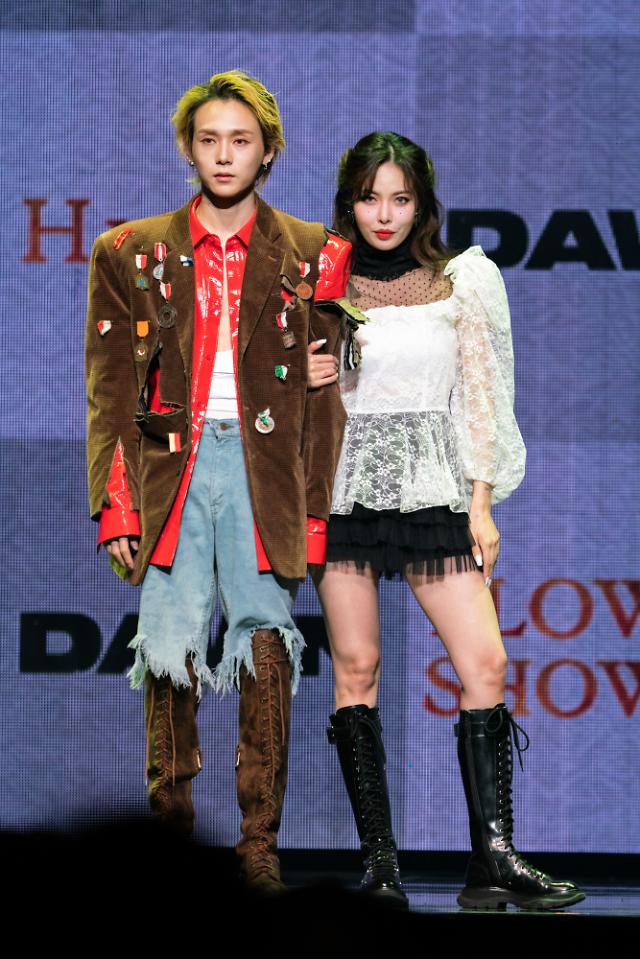 
SEOUL -- Female singer-dancer HyunA and her boyfriend DAWN, also a singer-dancer, revealed their unchangeable love as they came back together with separate singles after a one-year hiatus that began after they acknowledge a romance forbidden by their former management agency.

At a comeback showcase on Tuesday, the couple appeared with their hands clasped and disclosed their sincere love for each other. HyunA said her single "Flower Shower"' is a dance song that shows her unique charm of performing a bright yet energetic stage. DAWN's first solo debut single "Money" is about his inmost questions on the value of money while growing to an adult from a child.

HyunA, 27, said her new album was filled with her ambition to be full-bloomed "even though flowers fall" and showed her sexy and energetic image

HyunA has become an iconic sexy diva in the South Korean music scene since she debuted as a member of girl band Wonder Girls in 2007 and joined 4Minute later under Cube Entertainment. In 2016, she made a successful solo career. DAWN, a 25-year-old formerly known by his stage name E'Dawn, has left K-pop boy band PENTAGON for love.

Cube Entertainment terminated its contract with HyunA and DAWN last year after they openly admitted that they were in a romance. The two joined P Nation, an entertainment agency headed by Gangnam Style rapper Psy, in January this year.

HyunA described DAWN as an artist who has "a lot to learn musically."  "I sometimes cry when I listen to DAWN's music because he writes the lyrics sadly," she said. "I've thought about how we could make each other's albums good. Though we cheered for each other, we also had a tit-for-tat while preparing for the album. We didn't make concessions."

"It's my first time on stage as a solo artist, and I was wondering if I could do well without being intimidated. But I was encouraged a lot to be coming out together with HyunA," DAWN said, adding he "respects" his girlfriend because she was humble and full of positive energy and take good care of the people around her.

The two said they didn't want to lie to fans. "I've heard about a lot of worries that I was too honest at the time. But I was so scared of the situation where lies lead to lies," HyunA said. "I'd like to say sorry to those who were hurt. I decided that lying would hurt you even more," said DAWN.