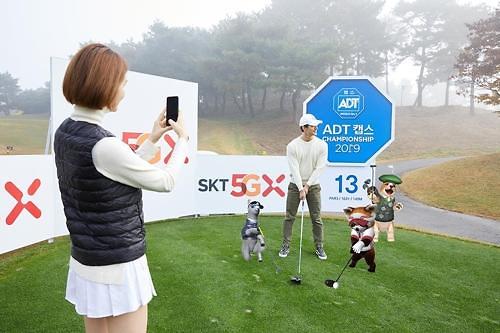 SK Telecom (SKT) said in a statement on Wednesday that it will live broadcast "ADT CAPS Championship 2019", a Korea Ladies Professional Golf Association (KLPGA) Tour golf tournament to be held at Woo Jeong Hills Country Club in Cheonan some 90 kilometers (55 miles) south of Seoul for three days from November 8.

Normally, several broadcast trucks are dispatched inside a golf course to live broadcast a tournament. The trucks and cameras are interlinked via cables as thick as a man's wrist in a kilometers-wide physical network. Golf live broadcasting based on 5G networks needs no broadcasting trucks or cables.

SKT will also broadcast super-high-speed shots of players' swings. The 2,000-frames-per-second footage will deliver rare moments that would take only a second in slow motion. The tournament will be broadcast on an SBS cable TV golf channel and on overhead silver screens installed inside the country club.