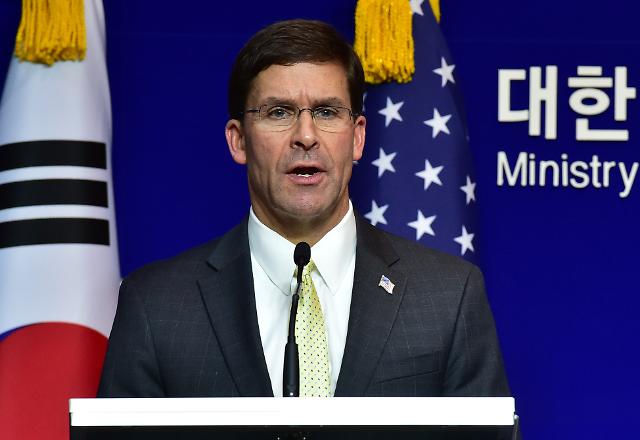 
SEOUL -- U.S. Defense Secretary Mark Esper emphasized the importance of a strong security alliance among American allies in Northeast Asia, saying China and North Korea would benefit from a trade and diplomatic row between South Korea and Japan that disrupted a pact on sharing sensitive military information.

The General Security of Military Information Agreement (GSOMIA) expires on November 23, but South Korea is reluctant to extend it in retaliation for Japan's trade retaliation orchestrated by Prime Minister Shinzo Abe. Washington, which has tried to set up a sustainable security alliance aimed at checking China and Russia in Northeast Asia, wants Seoul to change its mind.

"GSOMIA is an important tool by which South Korea, the U.S. and Japan share effective information, particularly in times of war. Expiration of GSOMIA will have an impact on our effectiveness, so we urge all sides to sit down and work through their differences," Esper told reporters after he attended the annual Security Consultative Meeting (SCM) in Seoul.

The pact was not an official topic at the high-level military conference, but South Korean Defense Minister Jeong Kyeong-doo said he had a personal exchange of views with Esper. Jeong responded with vague comment, saying the Seoul government had made its decision "after much deliberation."

Esper was aggressive in pressing South Korea to reconsider its decision. "The only ones who will benefit from the expiration of GSOMIA and continued friction between Seoul and Tokyo are Pyongyang and Beijing. That reason alone should be powerful enough for us to sit down and make sure we restore our alliance to where it was so we can work together to respond to our common threats and challenges."

The U.S. secretary urged South Korea to pay more for the presence of some 28,000 American troops. "South Korea is a wealthy country and could and should pay more to help offset the cost of defense," he said, adding negotiations on burden-sharing should be completed before the end of the year. Jeong called for a "fair and reasonable" deal.