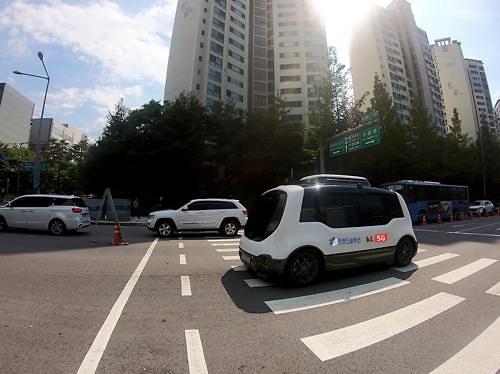 KT said on Monday that it would participate in a pilot project to demonstrate autonomous shuttles in the central city of Sejong. KT and Unmanned Solutions will modify a 1.3-kilometer-long street by the end of this year and start testing level 4 self-driving shuttles during the first half of 2020.

"The autonomous shuttle demonstration project in Sejong City will serve as a stepping stone to improve the safety of self-driving cars and repair related systems," KT's Connected Car Biz Center head Choi Kang-rim was quoted as saying. He said KT and its partner will cooperate with local governments to accelerate the commercialization of autonomous systems.

Level 4 autonomous vehicles require no input from drivers if there is no dangerous situation and level 5 vehicles do not require human attention. KT will test a new platform that requires no control tower on a six-seat shuttle bus for the first time in the country.

Unmanned Solution showcased WITH:US, a driverless all-wheel-drive minivan, at a motor show in Seoul in March. KT said earlier that the company aims to dispatch WITH:US shuttles to controlled environments such as theme parks, hospital complexes and factories to provide mobility services for children, old people and patients.