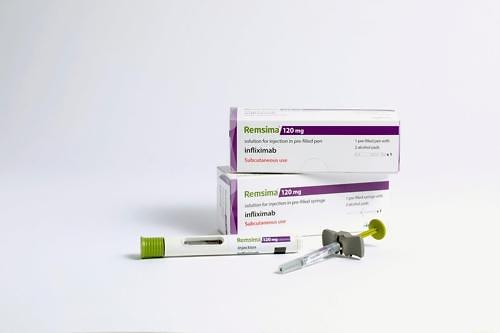 
SEOUL -- Celltrion, a bio firm in South Korea, has acquired final approval to sell Remsima SC, the subcutaneous injection of Remsima, a copy of Janssen Biotech's Remicade treating rheumatoid arthritis, in Europe, opening the way for worldwide distribution. The company plans to acquire U.S. approval in 2022.

Celltrion said on Tuesday that the European Medicines Agency (EMA), an EU agency in charge of the evaluation and supervision of medicinal products, has approved the marketing of Remsima SC. The company sent an application in November last year to EMA for marketing permission in an effort to recognize Remsima SC as a "biobetter," which is evaluated as a new drug.

A biosimilar has no clinically meaningful differences in terms of safety and effectiveness from its reference product. Biobetters, an improved version of existing products, may have a change in structure that makes it safer or more effective or a change in the formulation that makes it easier to administer or allows fewer courses of treatment.

Direct sales in Europe would be made by Celltrion Healthcare, which is responsible for overseas marketing and distribution. With Remsima SC, Celltrion has adopted an aggressive strategy to secure profitability and price penetration in competition with other subcutaneous-type products such as Adalimumab, sold under the brand name of Humira, which is on the World Health Organization's List of essential medicines.