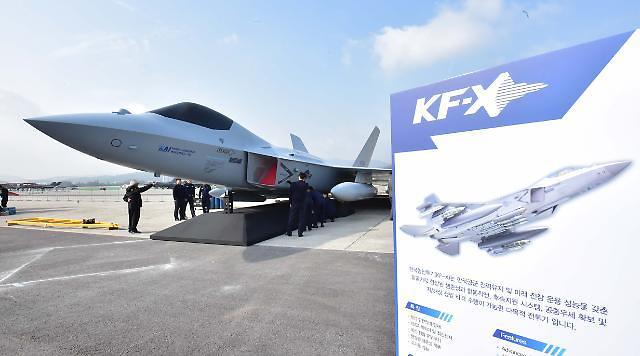 SEOUL -- With no technical support from U.S. companies, the developers of South Korea's home-made KF-X fighter jet will push ahead with the independent development of crucial software that allows high-tech aircraft to make detection by enemy radar more difficult by flying low and safe along the terrain.

Hanwha Systems, a provider of defense products and technologies, signed a deal with the Agency for Defense Development (ADD), a state research body in the development of defense technology, to develop automatic terrain-following (TF) and terrain avoidance (TA) software technology.

Hanwha has been involved in the development of core KF-X components, including radars that allow a very-low-flying aircraft to automatically maintain a relatively constant altitude. "The deal will expand our technological capabilities that have been strengthened by participating in the development of advanced sensors and avionics systems to the software sector," said Hanwha Systems CEO Kim Young-chul.

Hanwha is developing an active electronically scanned array (AESA) system. AESA is a computer-controlled array antenna in which the beam of radio waves can be electronically steered to point in different directions. AESA radars can spread signal emissions across a wider range of frequencies, allowing aircraft to radiate powerful radar signals while still remaining stealthy.

US companies such as Lockheed Martin and General Electrics were involved in the KF-X project, but Washington has been reluctant to transfer key technologies for stealth fighters and an advanced radar system, prompting South Korea to acquire related technologies independently or through other foreign companies, including an Israeli firm.

In October, Korea Aerospace Industries (KAI), the country's sole aircraft maker, showcased the actual model of KF-X along with an operational weapons system at a defense exhibition in Seoul. The broad design of hardware and software has been completed, with component fabrication underway. The exterior is similar to F-35A stealth jets, but KAI said it costs about half less to operate and has better mobility.

The KF-X project is aimed at manufacturing 120 fighter jets that would replace South Korea's aged fleet of US-made F-4 and F-5 fighters. Specifications outlined by KAI showed that the fighter's maximum speed is Mach 1.81 with its range put at 2,900 kilometers (1,798 miles). With a maximum payload of 7,700 kilograms, 10 "pods" for missiles and fuel barrels are installed on the bottom of the fuselage and wings.