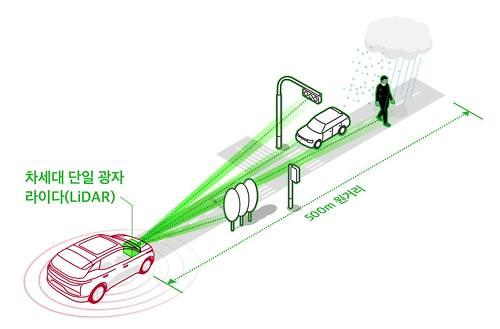 
LAS VEGAS -- The prototype of a high-performance Lidar capable of detecting objects at a distance of up to 500 meters was showcased at CES 2020 in Las Vegas. The new product can be utilized in autonomous driving and diverse industrial areas including disaster prevention and border surveillance.

Lidar is a surveying method that measures the distance to a target by illuminating the target with laser light and measuring the reflected light with a sensor. Differences in laser return times and wavelengths can then be used to make digital 3-D representations of the target.

To complement the weakness of existing Lidars that show low performance in adverse weather conditions, SKT and PSSI combined their technologies to develop a high-performance system that can be utilized in autonomous driving and diverse industrial areas including disaster prevention and border surveillance.

"SK Telecom will continue to develop competitive technologies and products not only in the area of autonomous driving but also in diverse industries, and provide services that meet the needs of customers," said SKT's tech innovation division head Lee Jong-min.

SKT has stepped up efforts to develop technologies related to future vehicles. Last year, the company partnered with Sinclair Broadcasting Group, a major American broadcasting company, and Harman International, an infotainment system unit of Samsung Electronics, to develop and test TV broadcasting for traveling vehicles by combining 5G technology and a broadcast network based on an Advanced Television Systems Committee (ATSC) 3.0.