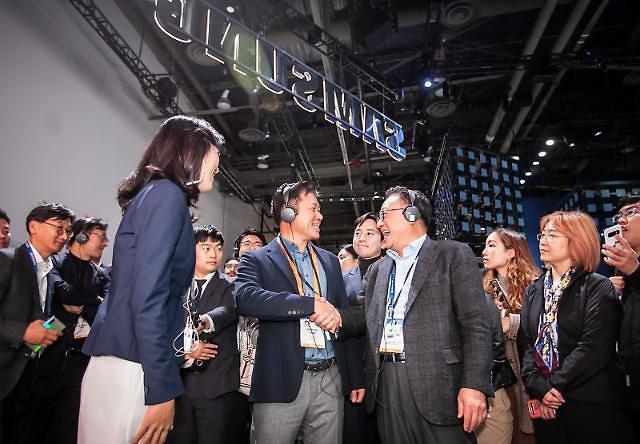 LAS VEGAS -- In an evitable choice to survive the competition with global leaders such as Google and Amazon, Samsung Electronics, the world's largest smartphone maker, and SK Telecom, a top mobile carrier in South Korea, joined hands to develop artificial intelligence technologies.

Samsung's telecommunications CEO Koh Dong-jin and SK Telecom (SKT) CEO Park Jung-ho agreed to cooperate in the development of AI voice assistant technology during a business meeting at CES 2020 in Las Vegas. Some 10 executives from both companies were present at the meeting.

"South Korea's AI technology is still insufficient to compete with global companies," Park said, stressing that almost every smart devices have AI features. Koh agreed, calling for cooperation "for the future of the country and for the future of young people."

Koh and Park agreed to operate their platforms independently while maintaining cooperation in the development of AI technology.

"When I return to South Korea, I will propose super-cooperation in AI to major domestic ICT companies," Park said at a separate press session, adding that super-cooperation means that each company will cooperate based on global standards "without taking care of their pride."

SKT would propose cooperative measures so that the entire player can benefit by supporting multiple AI platforms in respective terminals or integrating AI engines. Park suggested that SKT's AI speaker could be put in Samsung refrigerators.

AI voice assistants or smart speakers can recognize the voice of users and carry out tasks such as playing music, searching for keywords or controlling other home appliances hooked onto a home internet of things (IoT) network. There are about four million AI voice assistant speakers being used at homes and offices in South Korea as of 2019.

Google and Amazon lead the global AI assistant market, which is projected to reach $5.2 billion in 2024, according to global market research firm Markets and Markets. Google has a wide range of AI assistant devices for home AI networking such as Google Nest and Google Home. Amazon's voice assistant platform Alexa allows consumers to shop conveniently by talking to an assistant speaker.