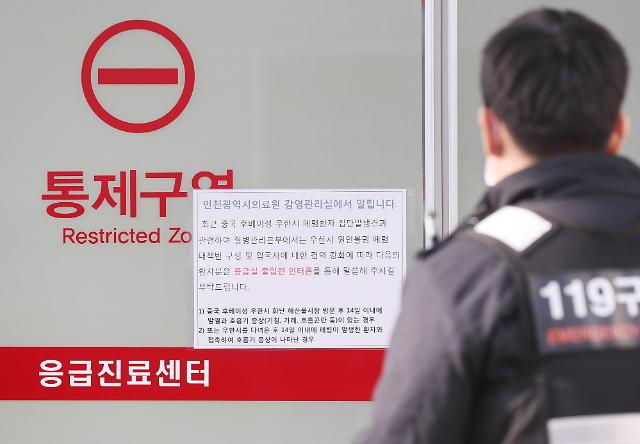 A notice about China's coronavirus is being posted at the entrance to the emergency room of Incheon Medical Center in the western port city of Incheon on January 20. South Korea reported the first confirmed case of the novel virus. [Yonhap News Photo]


SEOUL -- South Korea raised the level of its anti-epidemic alert after health authorities discovered the first confirmed case of China's coronavirus from a 35-year-old woman from Wuhan, the epicenter of the novel virus which has infected some 200 people and caused three deaths.

The Chinese woman was quarantined for showing related symptoms such as a high fever when she arrived on Sunday at an international airport in the western port city of Incheon, according to the Korea Centers for Disease Control and Prevention (KCDC), a state anti-epidemic agency.

The patient has been sent to a state-designated isolation hospital where she tested positive for the virus. South Korean Prime Minister Chung Sye-kyun ordered the government to quickly and thoroughly carry out epidemiological investigations to prevent the possible spread of the disease.

The woman was diagnosed with a cold at a hospital in Wuhan on January 18 due to symptoms such as fever, chills and muscle pain, KCDC said in a statement, adding she had no history of visiting traditional markets in Wuhan nor had she contacted wildlife.

Chinese scientists have linked the disease to coronaviruses, the same family as the deadly SARS and MERS viruses belong to. The outbreak of unknown viral pneumonia in Wuhan prompted Hong Kong and Asian countries to step up preventive measures such as airport temperature screening. Cases of people infected with the virus have been reported in Japan and Thailand.