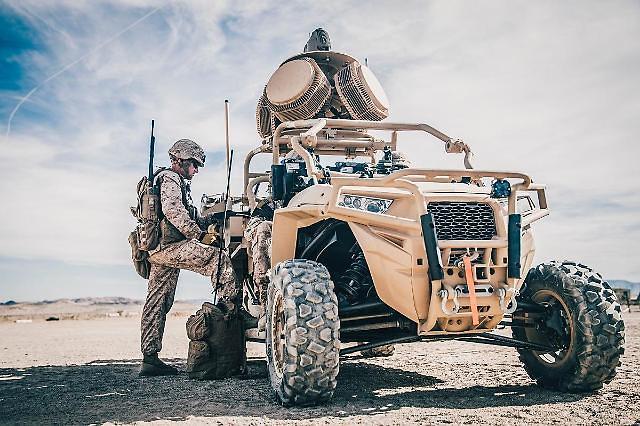 In the presence of President Moon Jae-in, the laser weapon demonstration was carried out by the Agency for Defense Development (ADD) Tuesday at combined military headquarters in Gyeryongdae some 150 kilometers (92 miles) south of Seoul, according to pool reports.

The system irradiates a laser beam onto a vulnerable area of target drones, and the state research body plans to weaponize it by 2023. It's was the first event to show ADD's counter-drone system which has been under development from 2016. Pictures and details were not released.

Anti-drone weapons include laser guns, radio jammers and conventional anti-aircraft weapons. Because it's not easy to intercept drones with laser weapons if external conditions are not good, South Korea is also testing "soft-kill" weapons that neutralize drones through radio waves. Jamming is a method that prevents drones from moving to the desired target by disrupting radio communication or GPS.

Due to the lack of publicity and information, it's not clear whether ADD's anti-drone laser system, unveiled on Tuesday, was related to a military project aimed at developing laser weapons using light sources generated from optical fibers for short-range air defense against small unmanned aircraft and drones..

High-flying small drones are difficult to detect and intercept. For this reason, some experts like Chang Jo-won, a professor at Korea Aerospace University's aeronautical science and flight operation department, were skeptical about the project's effectiveness.

The United States has introduced the Light Marine Air Defense Integrated System (LMADIS), an energy weapon that blasts radio signals. In July last year, US troops took down an Iranian unmanned aerial vehicle by using LMADIS, which comprises two vehicles, one serving as a command unit and the other outfitted with sensors and signal-jamming equipment. Lasers require an optical sight and precise targeting, while LMADIS is less expensive in neutralizing small drones.