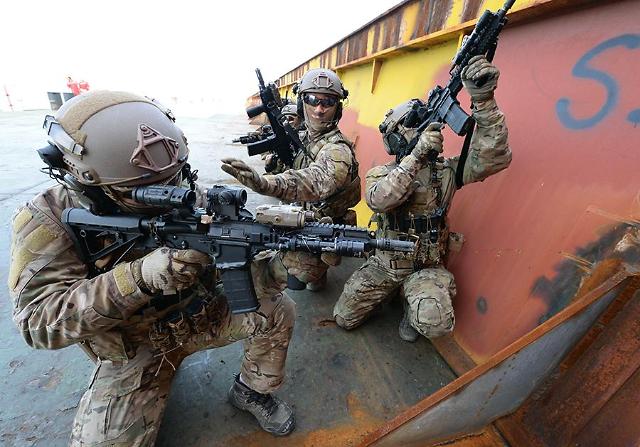 
SEOUL -- South Korea will dispatch troops to the Strait of Hormuz by expanding operational areas of its anti-piracy unit deployed nearby to help protect its vessels passing through the strategic waterway, the defense ministry announced Tuesday.

The forces, however, will not join a U.S.-led coalition, but conduct independent operations, the ministry said, a move seen as reflecting Seoul's consideration of relations with Tehran and Washington's request for contribution to its campaign to secure the waters off Iran.

"In consideration of the current situation in the Middle East, the government has decided to temporarily expand the Cheonghae Unit's sphere of activity in order to guarantee the safety of our people and the freedom of navigation of our vessels," the ministry said in a release.

The 300-strong Cheonghae Unit, which has been on an anti-piracy mission in the Gulf of Aden off Somalia since 2009, will broaden its mission areas into the Gulf of Oman, and further to the Persian Gulf, starting Tuesday, with the 4,400-ton destroyer, the Wang Geon, is to assume the role on the day.

While the Cheonghae Unit will act on its own, two liaison officers affiliated with the unit to the U.S.-led International Maritime Security Construct (IMSC) "for cooperation such as information sharing," the ministry said. The IMSC is headquartered in Bahrain.

"Since May last year, when tensions began to heighten in the Middle East, we've been reviewing diverse options," a senior defense ministry official said, adding that the government prioritizes the safety of South Korean people and vessels.

As the world's most important oil passageway and a chokepoint between the Arabian Gulf and the Gulf of Oman, the strait is the route to the open ocean for more than one-sixth of global oil production and 70 percent of South Korea's oil imports. Some 25,000 South Koreans reside in the Middle East, and around 170 South Korean ships sail through Hormuz about 900 times per year, according to government data.

Tensions in the region have mounted since Iran launched missile attacks on U.S. troops in Iraq earlier this month in retaliation for a U.S. airstrike that killed a top Iranian general. Before announcing the decision, the ministry had consultations with the U.S. and also explained reasons for the decision to Iran through diplomatic channels, according to the official. "The U.S. side welcomed the move, and I've heard that Iran said it understands Seoul's stance," he said.

In order to carry out missions in broader zones, the military equipped the destroyer with additional arms such as anti-submarine weapons, anti-aircraft guns and sonar compared to its previous configuration, according to a military officer. The Cheonghae unit will increase the length of that route it patrols to around 4,000 kilometers from the original 1,350 kilometers.

"We've made preparations for possible missions in the Hormuz Strait. But Cheonghae's basic missions -- anti-piracy activities and escorting ships -- remain unchanged," the officer said. As for the meaning of the "temporary" expansion of its role, the ministry official said it will be valid "until situations in the Middle East improve."
(Yonhap)