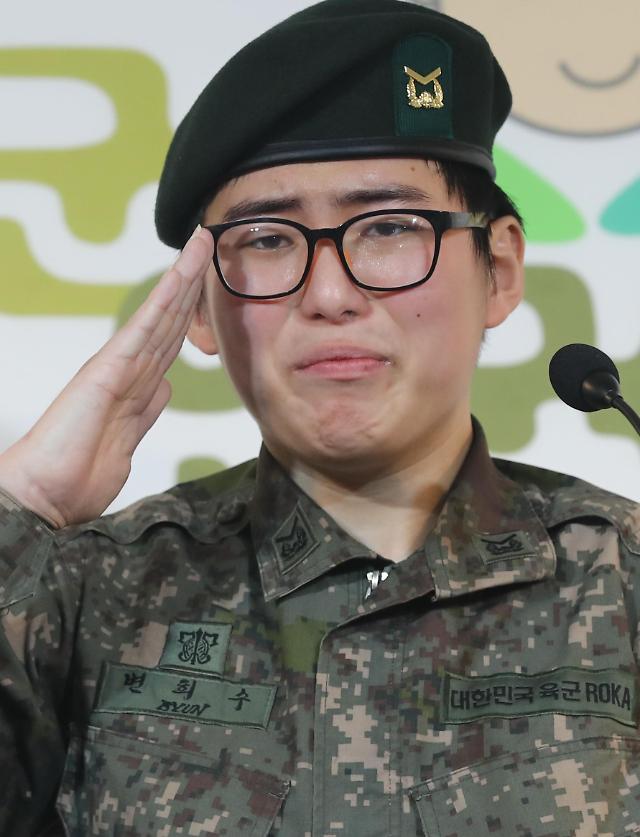 SEOUL -- Wearing a military uniform and black-rimmed glasses, a staff sergeant made a tearful salute, calling for her undisrupted military service, after the Army decided to kick her out for sex reassignment surgery. A military medical team has rated the officer as a "handicapped" person who is not eligible for military service.

"I want to show that regardless of gender identity, I can become a great soldier who protects this country," Byun Hee-soo, 22, told a press conference in Seoul on Wednesday at the office of a civilian human rights body. "I know that the military is not prepared to accept transgender soldiers."

Byun's public appearance came hours after her discharge was decided by a military committee that looked into the unprecedented case of an active-duty soldier who underwent transition surgery and has expressed a desire to keep serving in the military. From midnight on January 24, the soldier will become a civilian.

While serving as a tank pilot at a front-line military camp, Byun underwent sex-change surgery during her vacation last year and applied for court permission to correct gender. Byun pushed ahead with surgery despite warnings from a military hospital that she may not be able to stay in the barracks.

"This constitutes a reason for inability to continue serving in accordance with relevant legal standards, such as the Military Personnel Management Act," the Army said in a statement, adding the decision was made regardless of gender correction, based on the results of a medical examination.

South Korea's conscription law requires all able-bodied men to complete compulsory military service for about two years. The military classifies those who have a strong female orientation or homosexuality as sexual identity disorder and excludes them from conscription. There are no transgender soldiers because those who change their gender are automatically exempted.

"I hope that all LGBT soldiers will be able to carry out their duties and mission in a non-discriminatory environment," Byun said. "I want to remain a great precedent, and I want to add strength to this change."

"I kept suppressing confused feelings about sexual identity and overcame a difficult dorm life and a series of procedures with men to make sacrifices for the nation," Byun said, adding she had made up her mind because she could not endure serious depression caused by gender mismatch any longer.