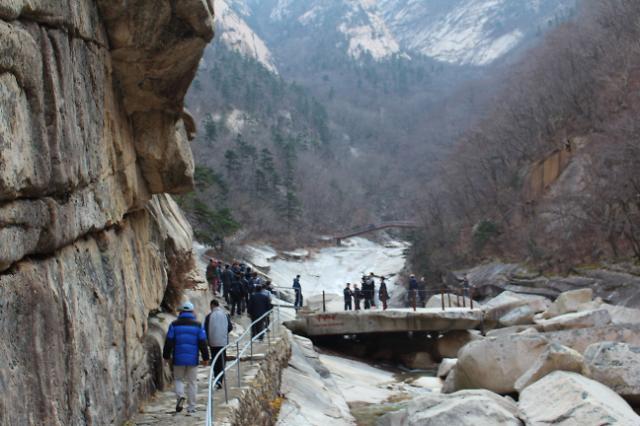 A file picture shows South Korean tourists walking in a valley of Mount. Kumgang before a cross-border tour program was suspended in 2008. [Yonhap News Photo]

SEOUL -- A global health scare caused by China's deadly virus epidemic sent North Korean going deeper into self-imposed isolation and raising a border barrier to disclude non-urgent physical contact with China and South Korea. Instead, Pyongyang activated a hotline to discuss pressing issues such as the fate of a suspended cross-border tour program.

In a message faxed through an inter-Korean hotline which was hooked up between Seoul and Pyongyang on January 30, North Korea said it would put off the planned demolition of facilities built by a South Korean company in the Mount. Kumgang resort, according to the South's unification ministry.

"We have been informed that (North Korea) decided to postpone the demolition of the Mount Kumgang area for a while to prevent the risk of coronavirus infection," ministry spokesman Yoh Sang-key told a press briefing on Friday. He said that North Korea was blocking or restricting traffic with China.

The North's message was sent on Thursday night when the two Koreas made a trial run of telephone and fax lines set up between Seoul and Pyongyang after North Korea shut down an inter-Korean liaison office in Kaesong, just north of the border, until the threat from the coronavirus disappears "completely." 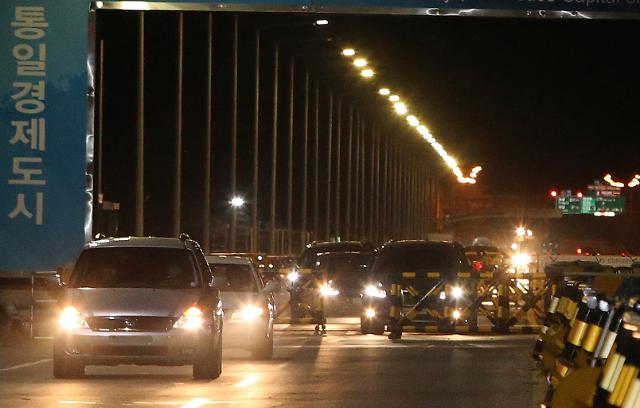 In October, North Korean leader Kim Jong-un issued a surprise order to transform ''unpleasant-looking" facilities in the Kumgang resort into a modern world-level tourist destination. Facilities in the resort have been left unattended since a South Korean housewife was fatally shot by a North Korean soldier in 2008.

North Korea has threatened to take unilateral action, rejecting South Korean calls for a calm approach. Seoul has insisted the row should be resolved through dialogue. In its latest message sent in late December, Pyongyang urged Seoul to start tearing down facilities in the resort in February.

North Korea has denounced South Korea for leaving the resort uncared for more than 10 years for fear of Washington, referring to U.S.-led international sanctions that have hampered inter-Korean exchanges and trade relations. Seoul has indicated it may seek Washington's concessions and understanding in keeping the suspended inter-Korean tour program alive.

The resort also houses a place for the reunion of South and North Korean families separated by the 1945 division of the Korean peninsula and the 1950-53 Korean War.

Kim Jong-un has called for the unconditional resumption of suspended inter-Korean projects such as cross-border tours and a joint industrial zone in Kaesong, which used to be a symbol of inter-Korean cooperation. The Kaesong zone, which was opened in December 2004, once hosted about 120 South Korean firms manned by more than 50,000 North Korean workers. Seoul shut it down in 2016 in retaliation for the North's ballistic missile and nuclear tests.

South Korea has been cautious as Pyongyang has yet to resolve a dispute with the United States over how to achieve denuclearization to a point that could satisfy the international community so that sanctions can be lifted. Washington has maintained a tough stance until North Korea entirely dismantles its nuclear program.