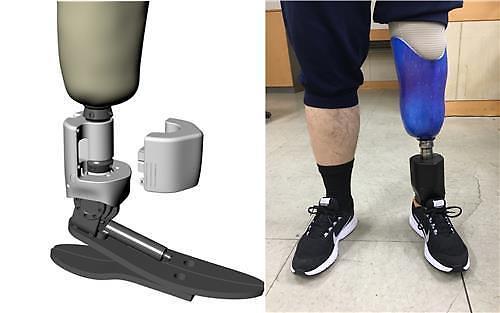 [The Korea Institute of Machinery & Materials]

SEOUL -- Selected veterans and others who lost their legs on official duty will be given smart robotic prosthetic legs which are lighter and make users feel more natural than existing products.

The Ministry of Patriots and Veterans Affairs (MPVA), a government body that handles veterans, said in a statement that it would launch a pilot project this year to provide smart robotic prosthetic legs for veterans and non-combatants who lost legs in battlefields or while carrying out official duties.

"We hope that South Korea's meritorious people will improve their life and live a glorious life with the support of the state-of-the-art robotic prosthetic legs that are convenient for everyday life," MPVA minister Park Sam-duk was quoted as saying.

The robotic leg developed by the Korea Institute of Machinery & Materials (KIMM) in December 2018 is lighter than a normal one made of metal. It houses a replaceable battery that lasts four hours and wearers using a smartphone app can change the mode of operation. Compared to bulky and heavy foreign products, the robot leg is lighter and smaller.

The veterans' ministry carried out a field test involving some 15 meritorious people last year and worked with KIMM to create an upgraded version with changes made to size, weight and battery time. Noise and heat were also reduced. A list of volunteers will be created this year after the second test.