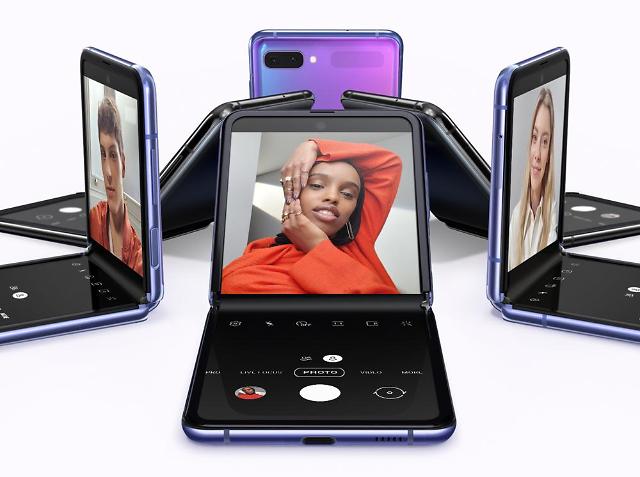 SEOUL -- In a bid to satisfy diverse consumer demands following the release of Galaxy Fold, a 7.3-inch smartphone with a flexible display, Samsung Electronics has brought a new game changer to the nascent foldable smartphone market with Galaxy Z Flip, a clamshell-type foldable phone with the touch of a retro feel.

While the first foldable phone released in September last year targets tech-savvy early adopters, it is obvious that the phone maker aims to attract a wider group of consumers who want smaller ones with Galaxy Z Flip, which will hit the shelves on February 14 with a price tag of $1,380. Galaxy Fold carried a higher price tag of $1,980.

Galaxy Z Flip bearing the looks similar to that of flip phones used in the late 90s was revealed at an annual showcase event in San Francisco. The 6.7-inch phone folds horizontally to the size that fits into the palm of an ordinary adult. It is small enough to freely slide into a pocket on pants or jackets.

Z Flip also has a 1.1-inch organic light-emitting diode (OLED) display placed on its exterior to display simple information such as the caller ID or text messages. The exterior display can also be used as a viewfinder when a user is taking photographs using the flip phone.

Z Flip weighs only 183 grams (6.4 ounces) and has a three-stop hinge that allows users to use the upper half and lower half of the phone's display separately. It can be placed on a flat surface and the angle of the upper half of the display can be adjusted freely like a laptop display. Samsung said Z Flip's hinge has a unique mechanism with specially-developed fibers that prevents dust from getting inside.

Tech fans expressed their excitement. "The innovation of Samsung phones are the lightweight characteristics," said Valhalla, a user from South Korean online IT community Clien. Another user nicknamed Calcog said: "Some people would question that what's so special about foldable phones? But I think people who move around a lot will find Samsung's new Z Flip very attractive because it's small when folded and it can fit into any pockets."