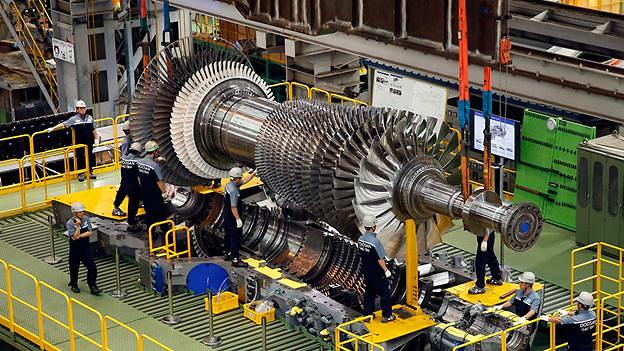 SEOUL -- To cope with a global shift to eco-friendly energy, South Korea launched a task force of private companies, state bodies and research institutes to push for the early commercialization and localization of gas turbines for power generation, based on a prototype developed by Doosan Heavy Industries & Construction.

The task force was formed on Thursday at a meeting hosted by the Ministry of Trade, Industry and Energy. Team members include Doosan Heavy, parts companies, five power generation companies and state-financed research bodies including the Korea Institute of Energy Technology Evaluation and Planning.

They agreed to work together on standardizing designs, developing cycle equipment and key components, and establishing a demonstration testbed, the ministry said in a statement. Joo Young-joon, head of the ministry's office of energy and resources, described independence in domestic gas turbine technology as a very important task in terms of energy security as well as economy.

Engineers from dozens of private and state research groups have been involved in the development of South Korea's home-made gas turbine because foreign companies were reluctant to transfer technology. Doosan Heavy's gas turbine is a high-capacity, high-efficiency product with a combined power output of 270 MW.

The home-made gas turbine will be supplied to a 500MW cogeneration power plant to be built in Gimpo west of Seoul for commercial operations in 2023. Gas turbines, which can utilize a variety of fuels, including natural gas, fuel oils and synthetic fuels, have become one of the most widely-used power generating technologies because they reduce the emission of fine dust and other air pollutants such as nitrogen oxides.