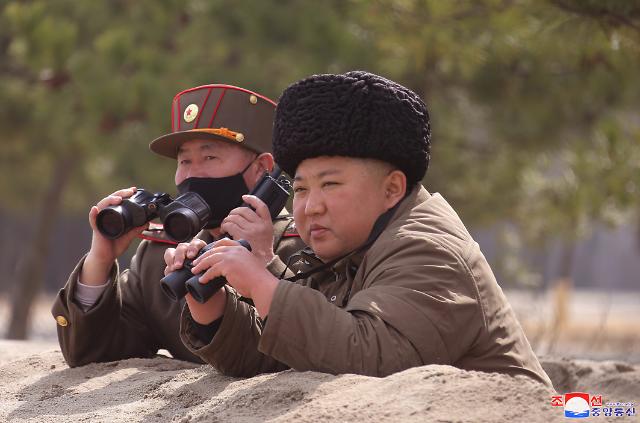 SEOUL -- In a firepower strike drill supervised by leader Kim Jong-un, North Korea apparently tested its "super-large" multiple-launch guided rocket system again in a week. Experts believe the new system with a maximum range of about 400 kilometers (248 miles) is probably ready for deployment at the battalion level.

South Korea's military detected a volley of projectiles launched from a place in the eastern town of Sondok on Monday, with at least three flying around 200 km and reaching a peak altitude of around 50 km. The launch interval of the first and second shots launched from the super-large rocket system was 20 seconds.

Pictures published by Pyongyang's state media showed a wheeled transporter-erector-launcher (TEL) with four launch tubes, which has been used in previous launches. One picture showed Kim wearing a woolen hat and Pak Jong-chon, chief of the General Staff, who put on a black face mask. Both were seen holding binoculars in an observation post.

In an earlier drill on March 2, two projectiles covered a distance of about 240 km and reached a maximum altitude of 35 km. The time of continuous launch was reduced to 20 seconds, the shortest yet to date. Specifications were not disclosed, but North Korea has tested 600-㎜ multiple rocket launchers called KN-25. 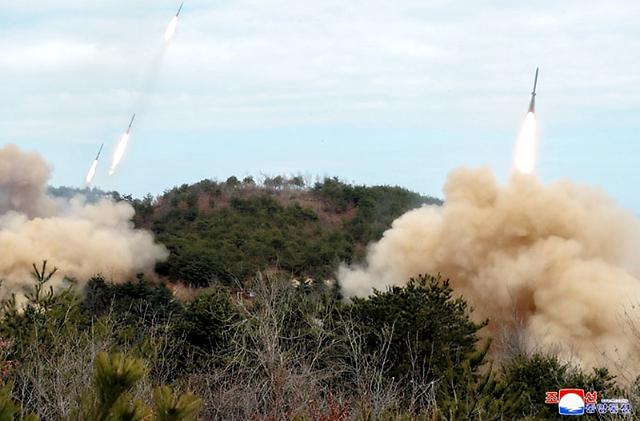 The latest launches signal that North Korea's KN-25 system is "likely now ready for military deployment," Michael Elleman, a missile expert at the International Institute for Strategic Studies (IISS), said in an article published by 38 North, the website of a U.S. think tank, on March 6.

The KN-25 system capable of attacking rear-echelon targets and suitable for deployment at the battalion level is about 8.2 m long and about 60 cm in diameter and weighs just under 3,000 kg, Elleman said, adding its payload bay is too small to deliver a nuclear weapon but likely carries a 400 to 500 kg conventional, blast-fragmentation warhead.

As long-range missiles remain unproven and have limited operational viability, Kim cannot be certain that they will work properly in a crisis, the expert said. "It is, therefore, reasonable to argue that Pyongyang may not view these long-range missiles as viable for nuclear warfighting. Rather, they are likely designed to deter attacks by threatening possible use against the United States under a limited set of circumstances."

If North Korea wants to enhance its ability to deter a U.S. attack, it will need to increase the credibility of long-range missiles through a more rigorous set of flight tests, Elleman said.