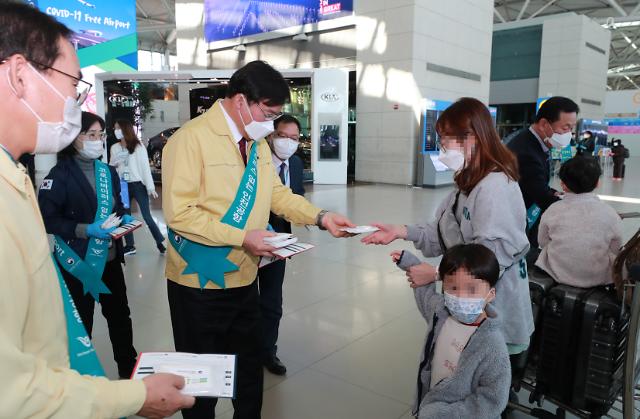 SEOUL -- South Korea announced tightened quarantine measures on travelers from five European countries as well as Dubai and Moscow after the World Health Organization declared that the global coronavirus crisis is now a pandemic.

Starting Sunday, all travelers from France, Germany, Spain, Britain and the Netherlands will go through fever checks, submit papers on health conditions and download a smartphone app for monitoring during their stay in South Korea. Those who arrive via Dubai and Moscow in the past two weeks will follow the same procedure.

The Korea Centers for Disease Control and Prevention (KCDC) said WHO's pandemic declaration would not alter South Korea's basic anti-epidemic guidelines. "As COVID-19 spreads across Europe, we will expand our special entry process for visitors from major European countries," Yoon Tae-ho, a KCDC official, said in a regular press briefing on Thursday.

"It is basic for us to be more nervous and prevent domestic radio waves, and there have also been challenges from Italy and other European countries, Iran, Japan and the United States, as well as how to effectively block the inflow of foreign countries," he said.

The number of new patients infected with a new coronavirus a day stayed at a relative level in South Korea, but Prime Minister Chung Sye-kyun called for all-out quarantine efforts to prevent "super transmission" through the infection of unknown origin in Seoul and its surrounding province.

Chung urged health officials to focus quarantine capabilities on preventing group infections, saying that patients of unknown origin and group infections have been on the rise, especially in Seoul and its adjacent province of Gyeonggi. "It could lead to super transmission in the metropolitan area, where half of the population is concentrated."

Health officials reported 114 new cases that brought the total number of patients to 7,869 as of midnight Wednesday. The virus has killed 67 people and 333 others have been cured and released from hospitals.

The epidemic is now in the early stages of slowing down, but fluctuations in daily figures are not significant, Yoon said, calling for special caution against sporadic group infections, especially in Seoul and nearby areas.

At least 102 patients were related to a call center at a building in the southwestern district of Guro in Seoul. "The (call center) case of collective infection is a critical issue that determines whether or not to prevent the further spread of COVID-19," Seoul Mayor Park Won-soon said.