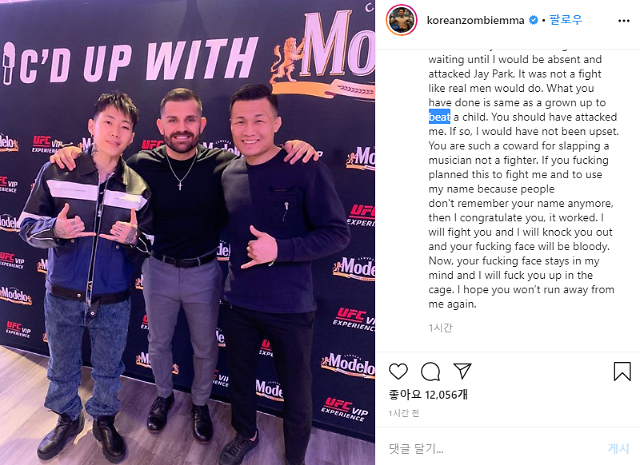 SEOUL -- AOMG, a South Korean hip hop record label, put an official end to a row with Brian Ortega, an American UFC fighter in the featherweight division, saying it would accept his apology.

AOMG founded by Park Jae-beom, a Korean American rapper and singer better known as Jay Park, manages Jung Chan-sung, "The Korean Zombie," ranked fourth in the UFC's featherweight division. The nickname of Jung, 32, comes from his zombie-like ability to continue to move forward and fight aggressively, even after taking heavy blows.

The agency said in a statement on Thursday that it would accept Ortega's apology, attributing the altercation to misunderstanding. About an official match between Jung and Ortega, AOMG said it depends on the outcome of Jung's surgery and consultations with the UFC "on various situations and conditions."

There will be no legal action, although AOMG voiced regret at Ortega's violence. The agency also insisted Park, 32, had not intentionally mistranslated "for marketing purposes."

AOMG's statement came after Ortega, ranked second, offered a more sincere apology for slapping Park inside an arena on March 8 during a UFC 248 event in Las Vegas. "My pride is my enemy, and over the last couple days I’ve been battling it. I hope you understand that I’m human and I’m flawed, in more ways than one," the 29-year-old wrote in an Instagram post.

“When I make a mistake, I own the consequences. But in this case the negativity that I’ve caused has spilled over to the people closest to me, and that’s how I know that what I did was truly wrong. I’m sorry to you guys and my family," Ortega said.