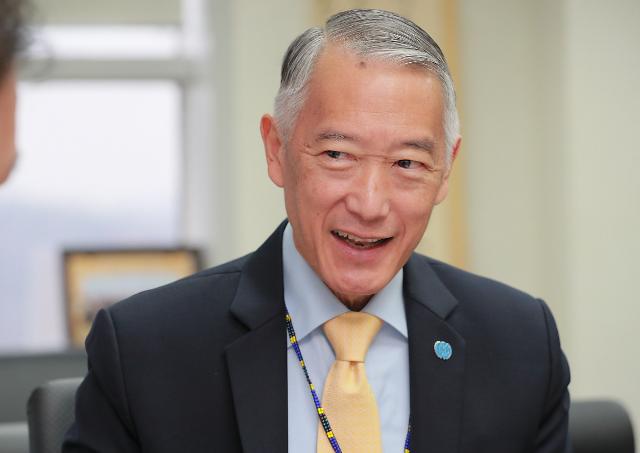 
SEOUL -- Many bio companies and researchers around the world have jumped into the race to develop vaccines or effective treatments for COVID-19 that triggered a global pandemic, but an institute affiliated with the United Nations Development Programme is more concerned about the genetic variation that could emasculate medical studies in progress.

Coronaviruses are a large family of Ribonucleic acid (RNA) viruses, and when RNA viruses replicate quickly, they often mutate.

"The highest priority right now is to make a vaccine against the current COVID-19, but the fear amongst the scientists is that it might change itself slightly and become different enough so the vaccine doesn't work," Jerome Kim, head of the International Vaccine Institute (IVI) based in Seoul, said in an interview with Aju Business Daily.

Therefore, Kim suggests the development of a "universal" vaccine is important. "So possibly, the research on that will come after the current crisis," he said. A universal vaccine refers to one powerful dose of immunization that can provide long-lasting protection for multiple influenza strains.

IVI has developed and delivered vaccines for global health. With his abundant experience in human immunodeficiency virus (HIV) vaccine research, Kim has led the institute, which is composed of 15 member nations and 143 researchers.

Normally, it takes five to ten years to develop vaccines with big pharmaceuticals involved in manufacturing, but it's possible to move vaccines along more quickly during an emergency, Kim said. "I assume it will take 12~18 months before we show the vaccine works, and then probably another 6~9 month until the vaccine is ready to be used over the world."

The first trial of an RNA vaccine developed by Moderna, a U.S. vaccine manufacturer, has turned out to be moderately successful, the IVI head said, adding that the outcome was "pretty remarkable," considering it only took six weeks. For commercialization, he said that U.S. and European state watchdogs would decide on the release of a new vaccine, depending on how safe and effective it is.

Kim highlighted the importance of a role by organizations like the Coalition for Epidemic Preparedness Innovations (CEPI) as companies are reluctant to work on vaccines due to high risks while it takes so long for a government to make a decision on funding. CEPI takes donations from public, private, philanthropic, and civil society organizations to finance independent research projects to develop vaccines.

"CEPI quickly delivers a sufficient amount of funds to the vaccine companies so that they can start the research from the scratch," Kim said. He said the foundation plays a "significant" role in getting access to the joint development of vaccines for everybody.

Relatively, South Korea is in a good position to develop vaccines and other therapeutics with huge state support, Kim said, predicting that innovative biotech companies can be major players in the global vaccine market with their potentials already demonstrated through the quick development of diagnostic kits.

Kim gave a positive outlook that South Korea is able to bring the epidemic under control, citing its accumulated experience in 2015, when the Middle East Respiratory Syndrome (MERS) virus killed 39 people. "Citizens actively participated in social distancing while the government has done a great job in keeping consistency and decisiveness. The authorities delivered one clear message to the citizens in every briefing, while making important decisions fast enough."

The United States and European countries, on the other hand, were not prepared and did not test enough people at the early stage, Kim said. "They are currently considering forced mandatory isolation as they are losing control over the pandemic."
© Aju Business Daily & www.ajunews.com Copyright: All materials on this site may not be reproduced, distributed, transmitted, displayed, published or broadcast without the authorization from the Aju News Corporation.