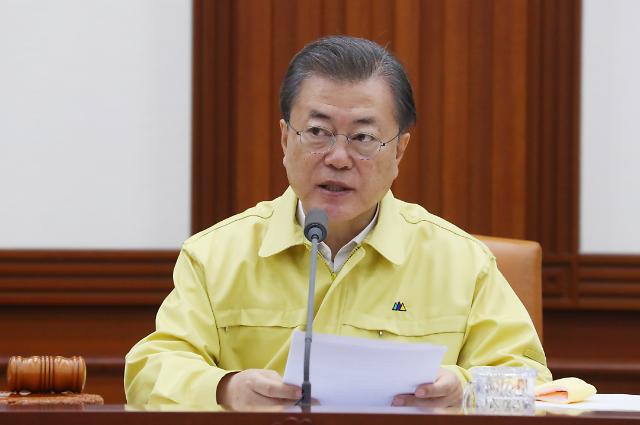 
SEOUL -- In the latest of a series of stimulus measures, President Moon Jae-in approved the one-off payment of relief money to about 70 percent of households, which have seen their income shrinking due to the reduction of economic activity for more than two months since a new coronavirus epidemic hit South Korea in January.

Moon said at an economic policy meeting on Monday that one million won ($822) in emergency disaster relief for a four-person household. South Korea has about 20 million households with the average number of household members standing at 2.4. High-income families would be excluded while about 14 million households would receive state money.

"The government needs to reserve as much financial capacity as possible to prepare for an endless economic shock and to quickly cope with job insecurity and corporate liquidity crisis," Moon said, promising to hand out money in April if the government wins parliamentary approval.

The collective payment of state money to each household will play a major role in reviving the economy by boosting private consumption, Moon said. He also approved the reduced or delayed payment of fees for electricity use and social insurances for low-income families and small-shop owners.

As a COVID-19 pandemic disrupted global trade and dealt a serious blow to South Korea's export-oriented economy, Moon doubled the size of a special rescue package 100 trillion won on March 24 to ease a corporate liquidity crunch and prevent companies from going belly-up. The government would spend 42 trillion to stabilize financial markets, including a bond market stabilization fund worth 20 trillion won.

"The government promises once again to be strong support for the people as they pass through Death Valley in the wake of COVID-19," Finance Minister Hong Nam-ki said. "The situation is longer than expected and the timing of the normalization of the Korean economy is becoming more difficult," he said.

The reduced or delayed payment for fees for insurances and utility use will have an effect of 9.7 trillion won, Hong said.