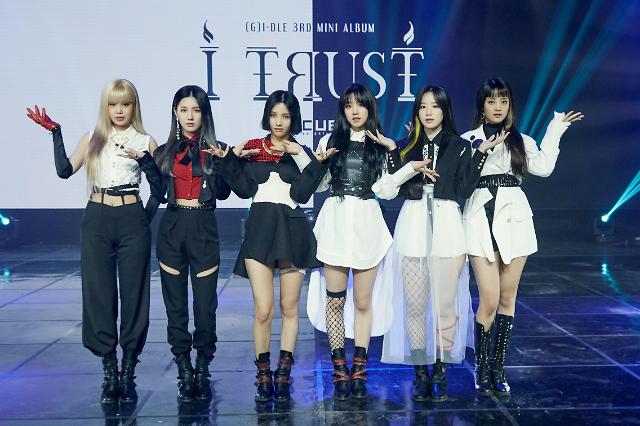 
SEOUL -- "It's a special song for global fans," Miyeon, the main vocalist, (G)I-DLE said about the title track of the group's new album "I Trust" which was released after the six-member multinational K-pop girl group postponed its first world tour that was to kick off in Bangkok on April 4.

" I feel sorry about the postponed world tour, but I think everyone's health is the most important thing. The whole world is having a hard time, and I want to meet fans after things get better soon," Miyeon said in an online showcase on Monday. The tour covering 32 cities was aimed at setting up a global fandom for the girls dubbed the "monster rookie" of 2018.

Known for brand recognition and marketing power, the band gained more recognition in 2019. In January this year, the group was voted as the Most Anticipated Singers/Groups in 2020 based on surveys that were participated by several Korean music agencies, broadcasting and program officials, composers and popular music critics.

The new album's concept is black and white and has a message "I can be confident just by believing in myself," said Soyeon, a rapper and team leader who produced songs. "I took the black and white concept to express that I follow my pure heart even if others think I am the devil."

Soyeon said she wanted to express a story about a person's feelings in the album. "I wanted to share my emotions, which are sometimes depressing and happy," she said, adding she tried to express "the process of trusting myself no matter what reality I encountered." "The name is intended to show the confidence of idols."

(G)I-DLE garnered popularity in December 2018 when members Soyeon and Miyeon collaborated with Riot Games, the operator of the world's most popular PC game "League of Legends", and American singers Madison Beer and Jaira Burns to form a virtual K-pop girl band. The music video created a phenomenon on YouTube and it was credited for boosting the popularity of the game worldwide.