Daegu reports no infection, sheds image as epicenter of epidemic 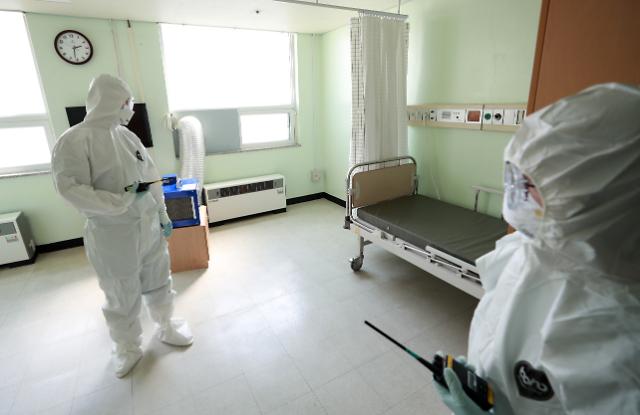 Health officials check an empty ward at a military hospital in Daegu on April 10 after city officials reported no new infections.[Yonhap News Photo]

SEOUL -- Shedding its image as a dreadful place to go, Daegu reported no new patient infected with a novel coronavirus for the first time since the southeastern city became the epicenter of South Korea's epidemic triggered by the mass infection of cult followers in February.

There was no cheer to celebrate the remarkable moment in Daegu on Friday when health officials reported no new infections from the economic center of a southeastern provincial region where millions of people have endured a painful and humiliating period for 52 days since the first COVID-19 patient was reported on February 18.

The regional economy collapsed and the entire city turned into a ghost town. People in other regions were reluctant to visit, and Daegu citizens confined themselves in their houses, with health officials hunting for 6,807 virus carriers, including 4,259 followers of Shincheonj Church of Jesus, a religious group which has been the target of public fury.

Citizens in Daegu, the country's fourth-largest city with a population of 2.5 million, await a new life, but Daegu Mayor Kwon Young-jin was not complacent, urging citizens to carry on with the voluntary implementation of quarantine measures especially in vulnerable places such as bars, dance clubs and other entertainment facilities.

"Given the global pandemic, it does not appear to be a matter that will end up with a temporary blockade and social distancing," the mayor said. "Citing the possibility of a second pandemic, experts mention the need for long-term preparedness."

Across South Korea, health officials reported 27 new infections, including 15 in Seoul and nearby areas. A total of 3,333 patients are still in hospital for treatment while 7,117 others have been cured. The virus has killed 208 people.