S. Korea goes ahead with parliamentary election despite overriding concern over COVID-19 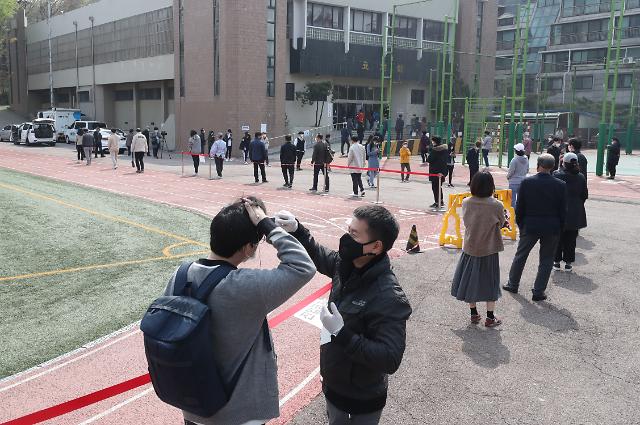 A health official checks the temperature of a voter outside a polling station in Seoul on April 15.[Yonhap News Photo]


SEOUL -- For an unavoidable political event that could jeopardize an uphill anti-epidemic campaign, millions of South Koreans wearing masks cast ballots to form a new legislative body, watched nervously by health officials who have tried hard to thwart a coronavirus attack for months.

The high-stake political event to elect 300 National Assembly members for a four-year term demonstrated South Korea's confidence in the safe management of balloting. Hundreds of mild cases and even people staying in their homes for obligatory self-quarantine were allowed to vote if they want.

The Korea Centers for Disease Control and Prevention (KCDC) has been very nervous, saying its anti-epidemic fight would be put to the test. "If many people visit polling stations at once on the day of the general election and go out to enjoy spring days, social distancing is likely to be virtually incapacitated," KCDC Deputy Director Kwon Jun-wook said on the eve of balloting.

"We are on the test to prove that society can be managed safely and in an orderly manner with social distancing, quarantine measures and infectious disease prevention rules, even if it is not a strong blockade like those carried out by China and some European countries," Kwon said.

Well aware of Kwon's worries, the National Election Commission (NEC), a state election watchdog, put the safety of people before balloting and created an unexperienced voting culture, asking voters to wear masks and disposable gloves and have their temperature checked at the entrance of 14,330 polling stations.

To prevent the penetration of a novel coronavirus, election managers used hand sanitizers, electronic thermometers and remote identification devices. Voters were ordered to keep a distance of at least one meter from each other.

Inside polling booths, voters should show ID cards and briefly lower masks to have their face checked before receiving ballot papers. Those who showed high fever or respiratory symptoms were guided into separate polling booths where health officials conduct close checks.

Campaigning by ruling and opposition parties has been overshadowed by a global pandemic which dealt a serious blow to South Korea's export-oriented economy. However, the turnout in two days of early voting hit a record high of 26.69 percent, showing the public's high interest in politics. 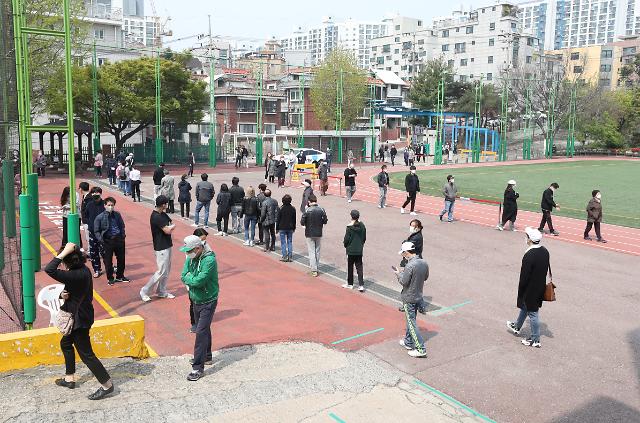 Voters keep a distance before walking into a polling station in Seoul on April 15.[Yonhap News Photo]

Beyond selecting new lawmakers, this year's parliamentary elections for legislators in 253 constituencies and 47 proportional representatives,  are seen as an interim evaluation of job performance by President Moon Jae-in who took office in May 2017 after his predecessor, Park Geun-hey, was impeached and jailed for a massive corruption scandal.

Ballot counting starts at 6:30 p.m. (0930 GMT) soon after voting by those in self-isolation at make-shift polling booths managed by election officials wearing full protective gear. Their movements and voting hours should not overlap with ordinary voters.

More than 40,000 people are in self-isolation, but there were no official figures yet on how many agreed to vote. Health officials are on high alert to prevent the temporary lifting of self-isolation from sparing community transmission.

Voting in South Korea, which has been praised by the World Health Organization for its successful containment of an epidemic, is attracting global attention as it is an unthinkable experiment for many countries stricken with COVID-19.

Since the first case was reported on January 20, South Korea has cured 7,616 patients, with 2,750 still under medical treatment. The coronavirus has killed 225 people. The number of daily new infections has been reduced to 27 on April 14.