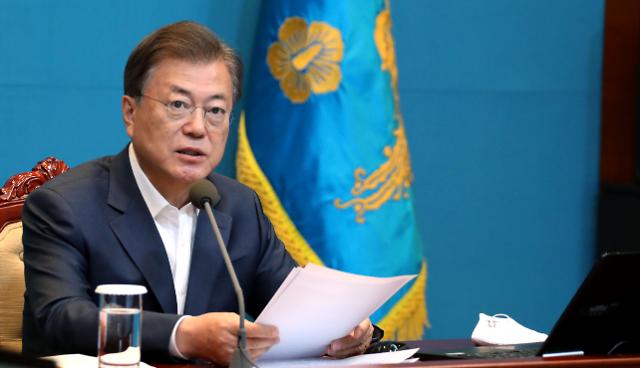 SEOUL -- South Korean President Moon Jae-in received a clear mandate from voters to exercise his strong leadership through an overwhelming victory in parliamentary elections as his administration garnered acclaim for making an effective response to a new coronavirus epidemic that has rattled the international community.

The ruling camp secured a comfortable majority of 180 seats in the high-stake political event to elect 300 National Assembly members for a four-year term, higher than predicted in exit polls. The results sprang up a surprise even for liberal voters who have supported Moon, a former human right lawyer who took office in May 2017 following the impeachment and imprisonment of his predecessor, Park Geun-hye, for her role in a massive corruption scandal.

The conservative opposition suffered a crushing defeat, taking away 103 seats, while splinter groups saw their political influence dwindling, as voters wanted a new political landscape at a time when their country is struggling with a national crisis brought on by the COVID-19 epidemic which has dealt a serious blow to South Korea's export-oriented economy.

Conservative opposition candidates who have played on economic issues failed to win over voters largely in metropolitan and neutral provincial areas. The birth of a huge political party has been unprecedented since South Korea achieved democratization in the early 1990s, ending decades of rules by former military strongmen.

"This general election once again struck the world with wonder," Moon said proudly in a statement. He said South Korea became the only major country to hold national elections despite concerns about the global pandemic thanks to active cooperation by voters.

"I feel great responsibility with my whole body ahead of joy in the great people's choice," Moon said, praising voters for complying with social distancing and quarantine rules in an orderly manner to record "miraculous turnout."

"What the people have shown through the elections is desperation. Their aspiration gave a boost to the government, which is doing its utmost to overcome the national crisis," Moon said. "I will never be conceited and humbly listen to the people's voice," he said, pledging utmost efforts to overcome an inexperienced national crisis.

Lee Nak-yeon, a former prime minister who is regarded as a potential presidential candidate, stressed the ruling camp should focus on overcoming the national crisis. Lee scored a clean victory in a high-profile race with opposition leader Hwang Kyo-ahn in an important district in central Seoul.

Beyond selecting new lawmakers, this year's parliamentary elections for legislators in 253 constituencies and 47 proportional representatives, were seen as an interim evaluation of job performance by Moon who is in his third year in office. Turnout was 66.2 percent, the highest in 28 years, showing the public's high interest in politics.

With an absolute majority of parliamentary seats, Moon can push ahead with his reform initiative that has been put on hold due to a bitter standoff in parliament. Moon and his party have called for the quick parliamentary endorsement of an extra budget to prop up the sagging economy,

Elections in South Korea, which has been praised by the World Health Organization for its successful containment of an epidemic, have attracted global attention as it's an unthinkable experiment for many countries stricken with COVID-19.

South Korea dispelled concerns among health officials over a possible spike in COVID-19 infections, demonstrating confidence in the safe and trouble-free management of balloting as yet. Hundreds of mild cases and even about 11,100 people staying in their homes for obligatory self-quarantine were allowed to vote.