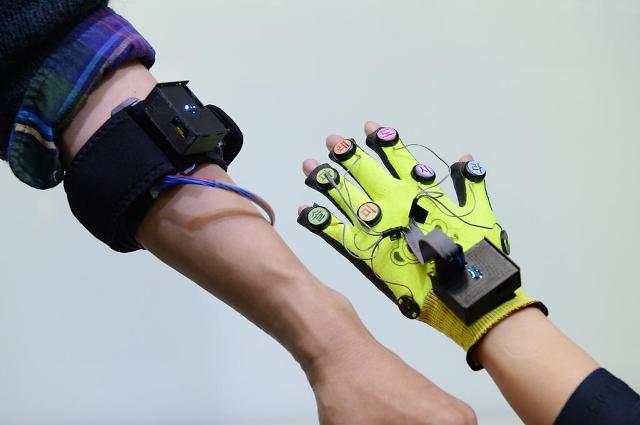 [Courtesy of the Electronics and Telecommunications Research Institute ]

SEOUL -- A South Korean state research institute has developed a system that can help the hearing-impaired to feel the different pitches such as low-pitched humming sound and high-pitched sound of scratching a nail against a blackboard through the sense of touch.

People with hearing disabilities can listen to sound by using devices such as a surgically implanted neuroprosthetic device. Because such devices convert sound to digital signals that directly stimulate the auditory nerve, it is hard for the hearing-impaired to feel the low and high pitches of sounds.

The Electronics and Telecommunications Research Institute (ETRI) said that its research team has developed a wearable system that would convert sound into tactile sensation patterns to stimulate certain parts of the body such as the fingers of the wearer.

ETRI said the wearable sound-reading system will help the hearing-impaired to engage in musical activities that would help the disabled to better understand spoken language and sound. The system, in forms of a wearable armband or a pair of gloves, detects the wavelengths, or pitches, of sound to convert it to digital signals such as vibration to stimulate different finger nodes.

The researchers said that through a series of field tests, participants with hearing disabilities were able to speak in preferred voice tones up to three times more accurately using the new sound-reading system.