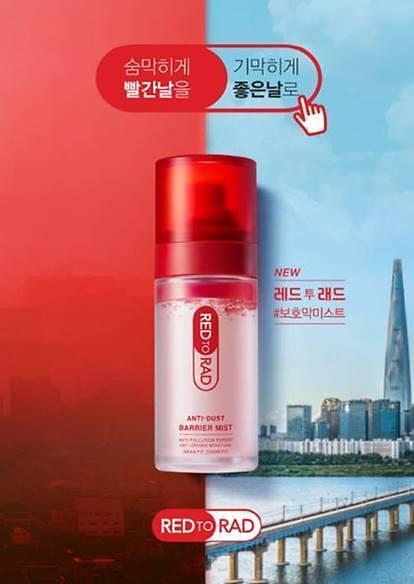 
SEOUL -- Yuhan-Kimberlym, a major health and hygiene product company in South Korea, made a foray into the country's stagnant adult skincare cosmetics market targeting female consumers aged between 25 and 34.

Yuhan-Kimberly, established in 1970, said in a statement on Monday that it has launched "RED TO RAD," an anti-pollution skincare cosmetics brand. The new brand was tested to have resistance against particulate matter, an air pollution substance also known as fine dust. The company said its new products reduce the adhesiveness of fine dust by 25 percent compared to its previous products.

The company, which has produced toilet papers to sanitary pads, runs a cosmetics lineup for babies and teenagers with sensitive skin. "Following the release of cosmetics products for babies and children, we have ventured into the adult basic cosmetics market," Yuhan-Kimberly said.

South Korea's cosmetics market has expanded at an annual growth rate of 2.3 percent to 14.4 trillion won ($11.8 billion) in 2019. The market led by cosmetics giants AmorePacific and LG Household & Health Care has focused on adult cosmetics including color make-ups, skincare and base make-ups. However, demand for anti-pollution cosmetics grew from 2016 by about 300 percent over a two-year period, according to the Korea Cosmetic Association, an association of cosmetics product makers.

South Korean cosmetics products, dubbed K-beauty, are popular in Asia. Despite a global lockdown caused by a novel coronavirus pandemic, exports of K-beauty products to China stood at $340 million in March, up 63 percent from a year ago, according to the Korea Trade Statistics Promotion Institute.