Soccer and baseball leagues ready to open delayed seasons in May 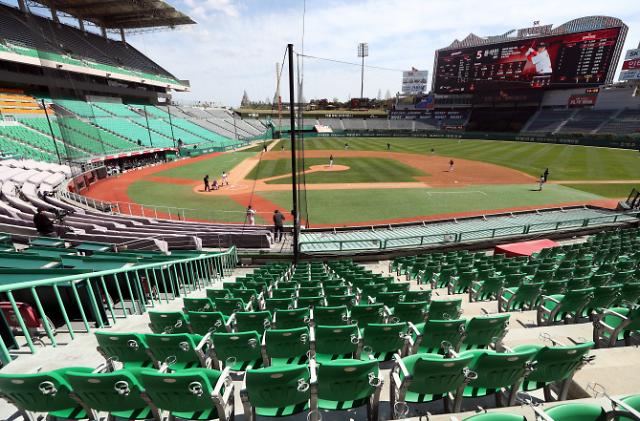 SEOUL -- Encouraged by a visible slowdown in South Korea's novel coronavirus epidemic, professional soccer and baseball leagues are flexing their muscles to open new seasons in May. However, they should play their own games without spectators for a while to follow quarantine guidelines on social distancing.

K-League, the professional football league that has postponed its 2020 season due to a COVID-19 epidemic has decided to come back in the second week of May. The 12-team 2020 season was put off in late February.

At a board meeting attended by club presidents on Tuesday, the Korea Baseball Organization (KBO) agreed to open the 2020 season of its professional league on May 5 when health officials ease strict rules on outdoor activities. Professional baseball is the most popular sports in South Korea. Originally, the main league, which has ten franchises, was to open on March 28.

"It's too early to discuss the timing of allowing viewers. Despite a decrease in the number of COVID-19 patients, we can't slow our guard down," KBO Secretary General Ryu Dae-hwan said, refusing to say when fans will be allowed to attend games again. He said the league could increase the number of spectators gradually only if the threat from COVID-19 is reduced.

Rhy gave a rough timebable for 144 games per team, but he stressed that the league can see a sudden halt if players test positive.

KBO's decision came as South Korea reported a single-digit increase in new daily infections this week. Since the first case was reported on January 20, 8,213 patients have been cured while 2,233 others are still under treatment. COVID-19 has killed 237 people, according to the Korea Centers for Disease Control and Prevention (KCDC).

KCDC Deputy Director Kwon Jun-wook said South Korea should not be complacent, citing a glob al pandemic. "Above all, there is a high possibility of being careless." A survey of public opinions is under way from April 12 to 28 over how to change social distancing. Experts and government officials are trying to work out a new system that blocks the spread of infectious diseases while allowing some activities to address public fatigue and sluggish economic activities.