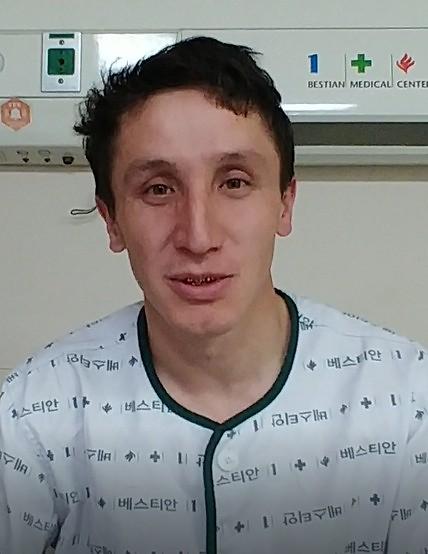 SEOUL -- A civic campaign has been launched in South Korea to permit a green card for a 28-year-old illegal immigrant from Kazakhstan in reward for his brave deed. He risked his life to save ten people trapped in a raging fire despite fears of deportation.

A petition was uploaded onto the presidential website on April 21, asking the government to provide help for the Kazakh man known as Ali. More than 5,300 people have supported the petition as of noon (0300 GMT) on Wednesday. More petitions have followed. If the petition garners more than 200,000 supporters, the presidential office should give an answer.

Ali became a local hero in Yangyang County some 155 kilometers (96 miles) northeast of Seoul after a fire blazed at a three-story apartment building on March 23. He was on his way home at around 11:20 p.m. and found that his apartment building was engulfed in flames. Many people were asleep at the time, and Ali ran up and down the stairs multiple times to evacuate people to safety.

Ali received burns on his neck and hands while rescuing a woman who was living in the studio room on the second floor. Ali knocked on the door several times, but there was little response. He then grabbed a gas pipe installed on the outer wall of the building and a TV wire and climbed up the window of the second-floor room.

Ali fearing deportation had to sneak out of the scene after firemen and police arrived. However, his brave deed touched the hearts of residents in Yangyang. Sonyang Elementary School vice-principal Jang Seon-ok in the region organized a team of local residents to find the wounded hero who could not receive any treatment. Ali was found several days later and sent to a burn specialist hospital in Seoul for treatment.

Jang and her neighbors asked Yangyang County officials to designate Ali as a person who was wounded during public duty. If the request is accepted, Ali would be compensated and receive medical insurance benefits.

A 41-year-old illegal immigrant from Sri Lanka was granted a green card for saving a 90-year-old woman trapped in a fire in February 2017. It was the first case of its kind. A welfare foundation run by South Korea's LG Group decided to reward Ali as a righteous man, saying he risked deportation and acted in a righteous way to save people even though he could have been hurt. The man from Sri Lanka received the same award.