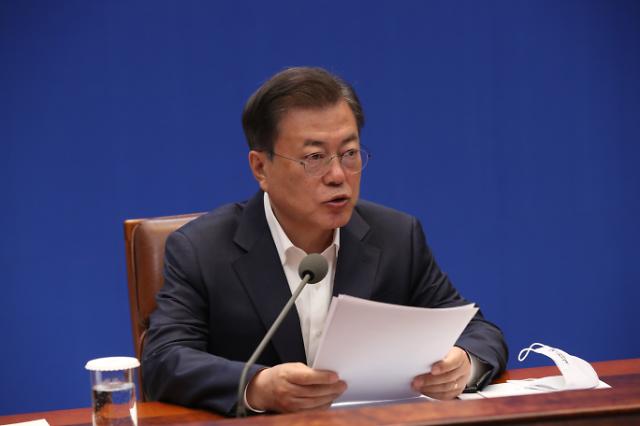 
SEOUL -- President Moon Jae-in proposed a fresh relief fund of 50 trillion ($40.5 billion) won to prop up aviation and other key industries hit hard by a novel coronavirus pandemic and ensure job security, calling for the Korean version of the New Deal to start large-scale infrastructure projects.

At a meeting of economic officials, Moon unveiled the creation of an industrial stability fund worth 40 trillion won to rescue South Korea's troubled key industries such as aviation, shipping, shipbuilding, machinery and car production. He also pledged an injection of 10 trillion won to stabilize the labor market.

"This is the beginning of a crisis," Moon said, adding that the COVID-19 pandemic has frozen South Korea's labor market, along with a corporate crisis. "The government needs to boldly pursue large-scale projects to create new jobs at a national level," he said, urging related ministries to organize a task force for the Korean version of the New Deal.

The New Deal was a series of programs, public work projects, financial reforms, and regulations enacted by President Franklin D. Roosevelt in the United States between 1933 and 1939. It responded to the needs for relief, reform, and recovery from the Great Depression.

Due to a pandemic, companies in key industries find it difficult to overcome their liquidity crisis with temporary funding, Moon said, promising to mobilize all possible support such as investment and payment guarantees beyond temporary liquidity support. The president said the government would try hard to ensure job security while preventing "moral hazards."

The relief package included the three-month payment of 500,000 won each to 930,000 people, including freelancers and other people who have been in blind spots. "We will support companies that maintain employment as much as possible," Moon said, suggesting the government would continue to expand employment support funds

The South Korean government has unveiled a series of stimulus measures, including the one-off payment of relief money to about 70 percent of households, which have seen their income shrinking due to the reduction of economic activity for three months since a new coronavirus epidemic hit South Korea in January.