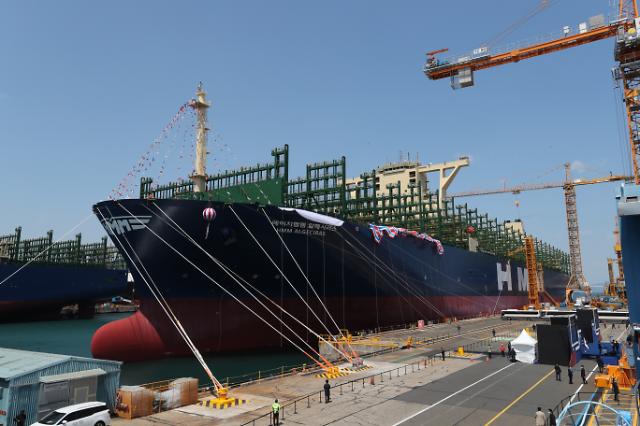 SEOUL -- The world's largest container ship capable of carrying 23,964 containers was christened in a high-profile ceremony attended by President Moon Jae-in at the shipyard of Daewoo Shipbuilding & Marine Engineering (DSME).

The ship for HMM, a creditor-controlled domestic shipping company formerly known as Hyundai Merchant Marine, acquired the name of "HMM Algeciras" in a ceremony on Thursday at the DSME shipyard on the southern island of Geoje. Algeciras is the name of a port city in the south of Spain.

"This ceremony will be the first place where the government's efforts to rebuild the shipping industry will pay off, and it will serve as an opportunity to promote the competitiveness of South Korea's shipping industry around the world," Oceans and Fisheries Minister Moon Seong-hyeok said in a statement.

In 2018, HMM signed contracts with three top shipbuilders in South Korea to acquire 20 container ships as part of a government scheme to rehabilitate the domestic shipbuilding industry which has been put under painful restructuring. Eight 16,000 TEU container ships will be delivered by Hyundai Heavy Industries, seven 23,964 TEU ships by DSME and five 23,820 TEU ships by Samsung Heavy.

The 12 giant ships will be installed with scrubbers to meet new rules imposed by the International Maritime Organization (IMO), a U.N. maritime safety agency. They are designed to carry liquefied natural gas (LNG) tanks for conversion into LNG-powered vessels in the future.

Ships can reduce the levels of sulfur oxide (SOx) emissions by installing an exhaust gas cleaning system such as SOx scrubbers. The scrubber technology works by passing the dirty exhaust gas stream created by the engine through chambers that contain a carefully generated "scrubbing cloud" of water.

TEU is an inexact unit of cargo capacity often used to describe the capacity of container ships. It is based on the volume of a 20-foot-long (6.1 m) intermodal container, a standard-sized metal box that can be easily transferred between different modes of transportation, such as ships, trains and trucks.