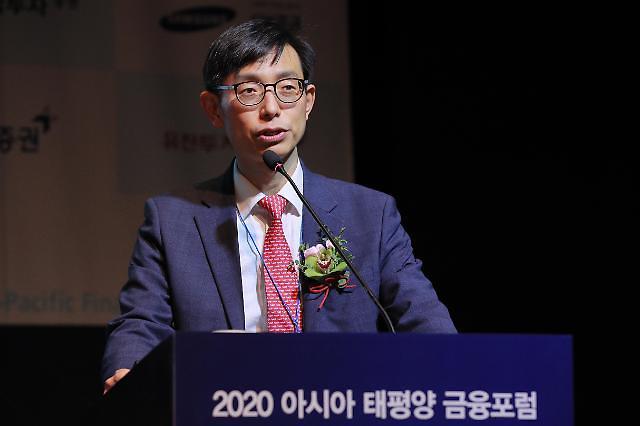 SEOUL -- Innovative growth is a key economic goal advocated by President Moon Jae-in. Steps have been taken to ease regulations that have blocked new industries and technologies from moving forward in the era of a new industrial revolution represented by artificial intelligence and big data.

However, experts think South Korea falls far behind rival countries in developing blockchain technology, which is at the center of the Fourth Industrial Revolution. Self-driving vehicles, the Internet of Things and intelligent robots, will advance only when AI big data technology is strengthened through blockchain, a data-distributed management technology.

"Blockchain technology is at the foundation of the Fourth Industrial Revolution. A country leading blockchain will lead the global economy," Hoh Peter In, a professor at Korea University's computer science and engineering department, told Aju Business Daily.

As a top expert in blockchain research, In called for the quick creation of a state promotion agency to help create innovative world-class companies that can lead the era of digital assets. "There should be blockchain researchers and developers, but there will is no progress in technology development without investors."

He said that security token offering (STO) should be allowed as soon as possible to draw investments into the development of blockchain research. STO refers to issuing securities tokens that reflect the value of assets. Assets such as real estate, artwork and data should be issued as tokens for trading.

The professor expressed concern about what he called the exodus of South Korean researchers to Switzerland and other countries which provide a better working environment for blockchain research. "Many Korean blockchain developers are going to countries where STO is allowed, such as Switzerland, Hong Kong, and Singapore."

"In the face of digital asset revolution, such a corporate exodus is very worrisome," In said, warning that South Korea's digital assets would be handed over to global companies "if we don't prepare for the future."

Blockchain is the "tree" of the Fourth Industrial Revolution, the expert said, describing autonomous cars, 3D printers and intelligent robots as "fruit." "Stem and column, the channels that nourish the fruit, are AI and big data technology. The key to AI and big data is whether we can secure quality data. And here's a dilemma. It's a possible data leak."

"No matter how good the data is, it will be an uneatable fruit if it doesn't guarantee security. Blockchain technology can solve this problem. You can safely manage your data, while at the same time being rewarded for your data delivery. That's why we call blockchain the root of the Fourth Industrial Revolution," the professor said.

Blockchain is a technology directly managed by data providers, not central administrators. In stressed that blockchain is highly secure and can break the central administrator's monopoly of data usage. Because data is not a free resource, companies that make money by processing data should allocate a certain portion of profits to individuals, he said.

In predicted that blockchain will change data capitalism in which certain platforms with data take all the wealth as data providers will be allowed to have data sovereignty. "There was no perception that the data that occurred to me was mine. We didn't know it could make money."

Smart contracts and data exchanges can form a data platform in two ways, the professor said. A smart contract means individuals provide data and receive value when a platform company presents conditions, such as where and how much information it will spend.

"If mutual requirements are met, the contract is signed. But it's cumbersome to sign a contract one by one, so we need to create an exchange where we can trade data like buying and selling stocks," In said. "It's about putting the price of data in competition so that the market can decide. There is no risk of forgery because it uses blockchain technology."

The professor said that such a change in the data paradigm will trigger a digital asset revolution, create wealth in digital space, and expand the digital asset market exponentially. "It will change the landscape of the global economy depending on who leads blockchain technologies."

"The scope of transactions can be expanded to a global level. Future wealth does not depend on how much expensive assets they have. Who becomes the new master of wealth will depend on who can first provide the blockchain-based global asset trading infrastructure or the technology to manage digital assets transparently and safely."