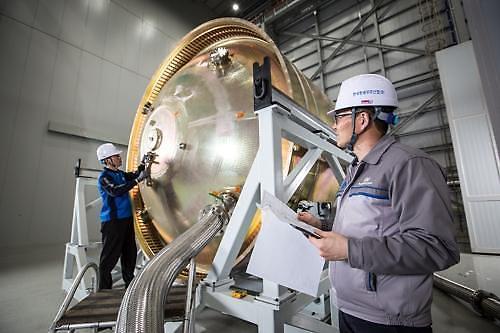 SEOUL -- South Korea, a latecomer in the space industry, unveiled a 10-year project to spend some 211.5 billion won ($171.6 million) on raising the localization rate of high-tech space components for satellites and launchers.

The Ministry of Science and ICT unveiled a "Space Pioneer" project to support the localization of space components from 2021. It aims to achieve a localization rate of 97 percent or more. Some 58 billion won was earmarked for selected technologies in the projectile field and 137.5 billion won in the satellite sector.

One or more companies should participate in each design project and share the outcome of research and secure technological competitiveness. South Korea has disclosed the goal of developing 11 small satellites weighing under 100 kilograms that would be carried by a three-stage indigenous rocket called Korea Space Launch Vehicle-2 (KSLV-2) or Nuri.

South Korea's space program has seen slow progress as other countries are reluctant to transfer core technologies. Three space rockets have been launched but two fired in 2009 and 2010 failed to reach orbit. The third one using Russian technology put a satellite into orbit.

In February this year, Cheollian 2B, one of South Korea's home-made geostationary communication satellites, was put into orbit to monitor and collect atmospheric and marine environmental information around the Korean Peninsula. The satellite was carried by the Ariane 5ECA carrier rocket that lifted off from the Guiana Space Center.