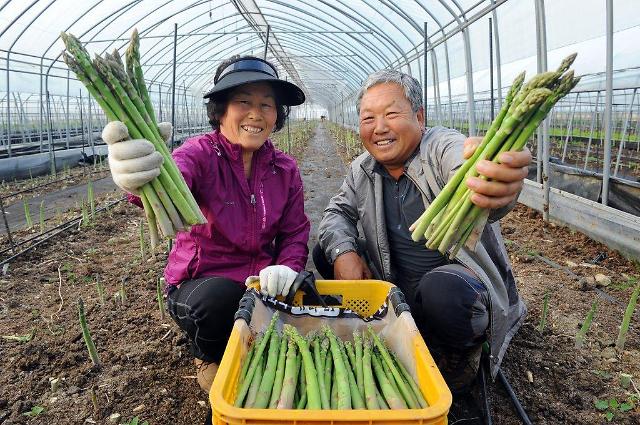 
SEOUL -- An online discount marketing promotion led by a provincial governor to help asparagus farmers who have seen a sharp drop in exports of their crops due to a coronavirus pandemic sparked an unexpected craze among South Korean online shoppers.

Asparagus, the shoot of a flowering plant in the lily family, is a common food ingredient in the western world, but it is not so popular in South Korea mainly because of its high price. One kilogram (2.2 pounds) of asparagus sells for 25,000 won ($20.4).

The eastern province of Gangwon has a chief producing area for Asparagus, accounting for 70 percent of South Korea's total production. A COVID-19 pandemic has foiled the province's initial plan to export about 45 tons of the highly-valued food ingredient this year.

Governor Choi Moon-soon brought up the idea of selling asparagus through an online shopping mall operated by an association of farmers at a discounted price of 7,000 won per kilogram. The province provided packaging and delivery fees and decided to evenly distribute profits among farmers.

An active social media campaign by Choi and provincial government officials has earned a good response from consumers. Since asparagus was put up for sale in early April, the first batch of two tons was sold out in less than a minute, becoming a hot online topic.

"I cannot believe that I have passed the Asparagus Exam. I am looking forward to cooking it for dinner tomorrow," SIM_LADY, a user from South Korean online community Clien said. Another user Yeonyoo expressed disappointment: "I have been trying to buy asparagus online and I have failed for days. I guess you have to be the chosen one to get your hands of them."

Asparagus farmers were not the only group to receive help from Choi. The governor rolled out a successful online marketing promotion in March to sell about 2,060 tons of potatoes that were left stranded because of the epidemic that led to the closure of mass canteen facilities at schools and big companies.