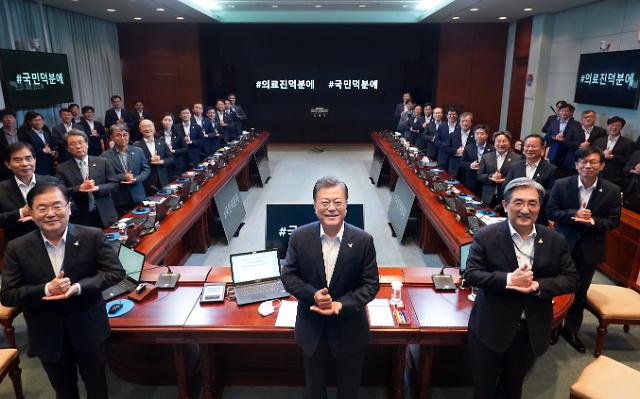 President Moon Jae-in and senior aides join the Thank You Challenge for medical workers at the presidential office on April 27. [Yonhap News Photo]


SEOUL -- "I express my respect and gratitude to medical staff for their dedication," President Moon Jae-in said after he joined a social media initiative to commend doctors, nurses and health officials for their dedicated services to a national fight against a coronavirus epidemic.

A social media relay called "the Thanks to (You) Challenge" has been created, engaging prominent figures and encouraging them to interact and share inspiring images and videos of sign language which means respect and pride, on social networking services. Tree hashtags: "#Campaign thanks to you," "#Thanks to you" and "#Thanks to medical staff" were attached.

According to the rules that point to three participants who will continue the relay, Moon has been picked as the next participant. At a meeting in the presidential office on April 27, Moon and senior aides took off their masks and shouted, "Thanks to the medical staff! Thanks to the people!"

Separately, Moon issued a message on his social media account: "Thanks to the medical staff, our precious lives are protected and we are winning the fight against the virus," he said, praising medical personnel for helping South Korea earn global recognition as a model country in quarantine.

As the next participants in the social media relay, Moon picked volleyball player Kim Yeon-kyung, Kwon Dong-ho, a sign language interpreter at the Korea Centers for Disease Control and Prevention, and Baby Shark in an animated cartoon for toddlers. Baby Shark" has tens of versions in many languages, and it is now one of the most-watched videos on YouTube.