Schools reopen this month based on confidence in quarantine 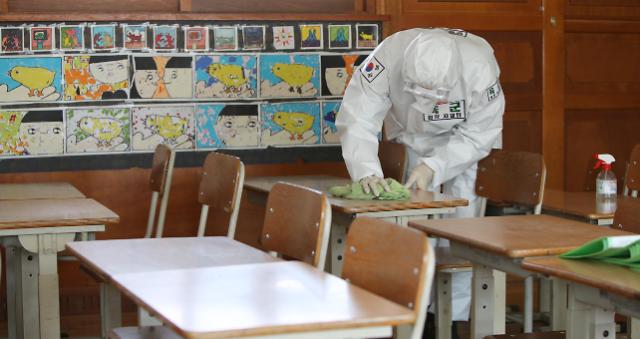 SEOUL -- In a bold attempt based on confidence in its quarantine system that has been praised and benchmarked abroad, more than six million students, teachers and support personnel will go back to school campuses gradually from May 13 as South Korea eases social distancing guidelines this week to permit greater social and economic activities than before.

High school seniors and students at small elementary and middle schools in remote areas such as islands will return to school on May 13, followed by the gradual opening of classes for other grades until June 1. The first semester normally opens in early March, but schools have postponed the opening of classes. Online schools opened on April 9.

"Now we are preparing for educational activities at schools while managing the daily risk of infectious diseases," Education Minister Yoo Eun-hye said, urging some 500,000 teachers and 5.4 million students to comply with strict anti-epidemic rules.

Students should clean their desks on their own as soon as they come to school, open their classroom windows frequently, take off masks at mealtime only, and maintain a distance at canteen. Meticulous monitoring and body temperature checks will be maintained. Schools will switch to remote classes if COVID-19 is detected.

The decision to re-open schools came after the Korea Centers for Disease Control and Prevention (KCDC) unveiled new rules on social distancing that would be enforced from May 6. The new system blocks the spread of infectious diseases while allowing some activities to address public fatigue and sluggish economic activities.

"As for the possibility of a collective outbreak of school, we believe that's possible, although it is not very likely," KCDC director Jeong Eun-kyeong told a regular press briefing on Monday. She said schools have staged mock training in advance to prevent infections.

Encouraged by a visible slowdown in the epidemic, professional soccer and baseball leagues have opened new seasons, playing their own games without spectators, while churches and Buddhist temples have resumed weekend services. It's not the same as it used to, but tourist destinations, traditional open markets and shopping malls are vibrant again with visitors.