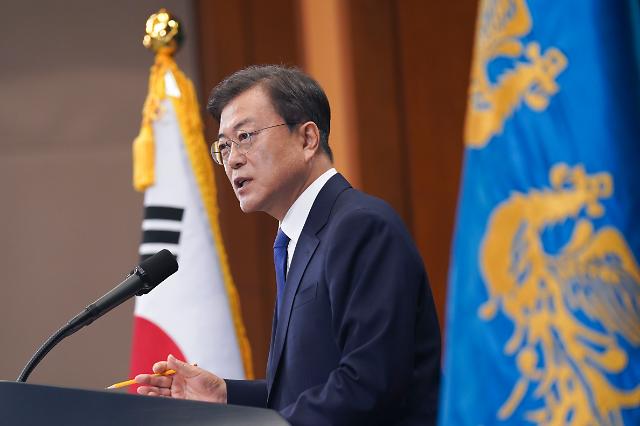 President Moon Jae-in makes a speech during an event marking his third year of the inauguration on May 10. [Yonhap Photo]


SEOUL -- President Moon Jae-in urged South Korea to brace for the second wave of a coronavirus epidemic as a new outbreak originating from gay clubs spread, leaving more than 50 people infected and threatening to dampen efforts to surmount a national crisis by setting a global standard in the prevention of COVID-19.

The fresh outbreak in the epicenter of gay nightlife in Seoul embarrassed health officials as it came after South Korea eased social distancing guidelines to permit greater social and economic activities than before, with millions of students ready to go back to school campuses gradually from May 13.

"The crisis is not over yet, and an even bigger challenge remains," Moon said Sunday in a speech marking the third anniversary of his inauguration. "The infection cluster which recently occurred in entertainment facilities has raised awareness that, even during the stabilization phase, similar situations can arise again anytime, anywhere in an enclosed, crowded space. It’s not over until it’s over."

Moon stressed that South Korea should not lower its guard. "While keeping enhanced alertness till the end, we must never lower our guard regarding epidemic prevention," he said, adding South Korea should maintain its right quarantine and medical systems combined with experience to respond quickly to any unexpected infection clusters.

"We should also brace for the pandemic’s second wave, which many experts are predicting. However, we cannot afford to keep waiting until then to return to normal daily lives," the president warned. 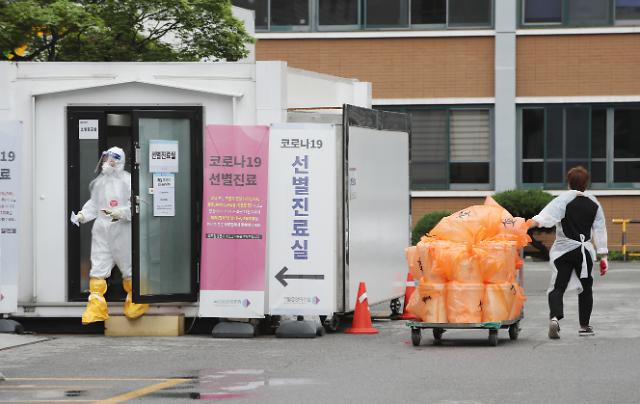 A medical staff walks out of a COVID-19 screening center in central Seoul on May 10. [Yonhap Photo]

The coronavirus epidemic in South Korea began in earnest in late February when a cluster of infections in a religious group in Daegu some 230 kilometers (142 miles) southeast of Seoul created thousands of patients, triggering a nationwide social distancing campaign and a network of some 1,100 COVID-19 screening centers and treatment hospitals.

The outbreak in Seoul began after a 29-year-old man made a free-wheeling overnight trip on May 1 through gay bars and dance clubs in Itaewon, an international tourist hotspot, following a holiday journey of urban and rural areas with three friends. The man's moving line was so wide that health officials had to track hundreds of people for immediate screening. The number of new cases stood at 54 as of May 9.

Seoul City Mayor Park Won-soon took quick action with an indefinite administrative order to prohibit all gatherings at adult entertainment facilities including bars and dance clubs. For an intensive epidemiological investigation, city officials and district offices are watching thousands of people who are suspected of having visited dance clubs in Itaewon in early May.

Moon vowed to upgrade South Korea's public health and disease-controlling system. "We will significantly enhance our public healthcare system and ability to respond to infectious diseases to build a safer Republic of Korea. These tasks are very urgent if we are to prepare for the second epidemic wave that experts predict will hit this fall or winter."