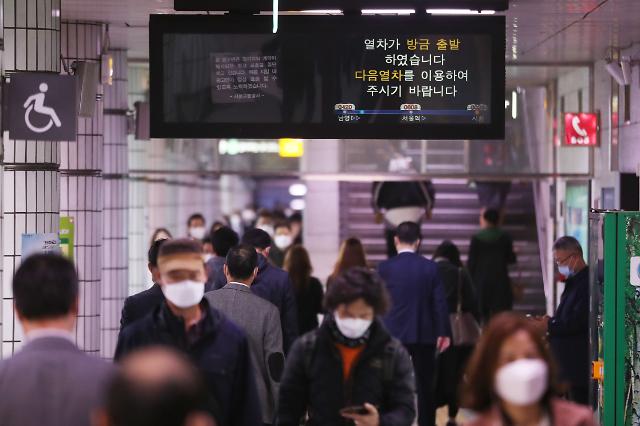 SEOUL -- In an effort to prevent the second wave of a novel coronavirus pandemic, any rush-hour commuters who do not wear masks will be banned from boarding subway trains in Seoul. Emergency masks are available at subway station kiosks.

The order would take effect on May 13. The Seoul city government urged citizens to avoid using public transport during busy commuting hours to lower the possibility of contamination, and those with underlying diseases to refrain from using crowded public transport services.

Seoul Metro, the operator of Seoul's subway system, sees 160 passengers per car as full capacity. The number of passengers easily exceeds full capacity during commuting hours. Train operators can decide to skip a station if the degree of congestion reaches 170 percent.

Since late February, Seoul has gradually reduced the number of public buses as many workers stayed home to telecommute. To cope with a growing number of passengers in May, extra buses will be deployed to busy routes starting Wednesday.

The coronavirus epidemic in South Korea began in earnest in late February when a cluster of infections in a religious group in Daegu some 230 kilometers (142 miles) southeast of Seoul created thousands of patients, triggering a nationwide social distancing campaign and a network of some 1,100 COVID-19 screening centers and treatment hospitals.

The fresh outbreak in Seoul began after a 29-year-old man made a free-wheeling overnight trip on May 1 through gay bars and dance clubs in Itaewon, an international tourist hotspot, following a holiday journey of urban and rural areas with three friends. The man's moving line was so wide that health officials had to track thousands of people for screening.