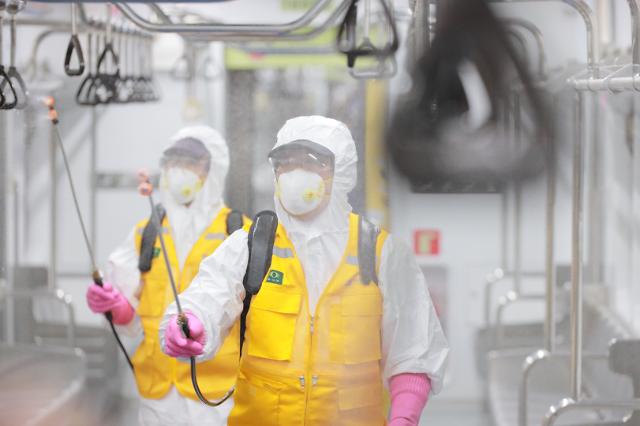 SEOUL -- Health officials saw a spike in coronavirus infections originating from a place frequented by sexual minorities as a forgone incident that probably exposed the blind spot of social distancing in South Korea's anti-epidemic fight lauded and benchmarked by other countries.

After an initial epidemiological investigation into a fresh COVID-19 outbreak in the epicenter of LGBTQ nightlife in Itaewon, an international tourist hotspot in Seoul, the Korea Centers for Disease Control and Prevention (KCDC) took a theoretical approach to find the starting point of how the virus has invaded. LGBTQ stands for lesbian, gay, bisexual, transgender and queer.

As of May 12, the outbreak in Itaewon has left 102 people mostly in their 20s and 30s, including 92 men and 10 women, infected with the highly contagious coronavirus since the first patient was detected on May 6. The total number of COVID-19 patients still under treatment rose to 1,008. Health officials said that 73 people were directly related to Itaewon while 29 others are family members, friends and company colleagues.

"We now judge that the mass outbreak in Itaewon clubs appeared to have not started from one epicenter but from a variety of epicenters," KCDC Deputy Director Kwon Jun-wook told a regular press briefing on Tuesday. Perhaps even before the latest outbreak, COVID-19 might have spread quietly in the community and somewhere, he said.

At first, many who have visited LGBTQ clubs and bars in Itaewon were reluctant to come forward for screening, giving a hard time to health officials. Days later, the number of people who visited virus screening centers exceeded 10,000 as a separate COVID-19 case was reported in Itaewon at a big ordinary dance club that was not related to LGBTQ people.

Police have launched a nationwide investigation by securing phone numbers, the history of credit card usage, mobile phone base station access and CCTV images, but about 2,000 were out of contact.

Based on their mobile phone base station access, text messages calling for COVID-19 screening were sent to 10,905 people who have stayed overnight near bars and clubs in Itaewon from April 24 to May 6 regardless of their sex identity.

Hong Seok-cheon, a 49-year-old actor and TV personality who has been the most prominent openly gay celebrity in South Korea since he came out in 2000, made a sincere appeal as infections were reported in various places and professions, threatening to dampen government efforts to permit greater social and economic activities than before and re-open schools.

"Please be brave right now and take the test," Hong said in his Instagram post. "It is true that sexual minorities are afraid of their identity being known to their families, acquaintances and society. It's time to be brave.... Of course, I know better than anyone else that you are worried about outing. But now, the health and safety of yourself, your family and society come foremost."

Homosexuality is not illegal in South Korea. Public images of LGBT people have gained general acceptance, but many still keep their sexuality under wraps. Health officials are concerned about a quiet spread of COVID-19 as visitors to gay clubs may not come forward to get a test. The government has adopted the carrot-and-stick method to draw them out of the dark with a pledge to guarantee anonymous inspections.

KCDC director Jeong Eun-kyeong said the outbreak in Itaewon was the result of inattention because close exposure was made in narrow space and many did not wear masks. "We don't judge that one or two people caused this," she said. "We judge that there were some infections within the community and that they were slightly amplified through clubs during the holiday period."